The MSLR Museum is very proud to have Great Eastern Railway (GER) horsebox no. 180 as part of its collection of historic railway vehicles. It is believed to be the oldest preserved horsebox in the country and is of great historical importance.

When it arrived at the Museum in 2002, it had been out of service for more than a century, and was basically a wreck. Today, following a huge amount of work by many individuals, the restored vehicle is in full running order.

In the early 20th century, the Mid-Suffolk Light Railway owned two horseboxes (nos. 9 & 10), which were bought secondhand from the GER. These were of a slightly different design to no. 180 – in fact they were more modern! 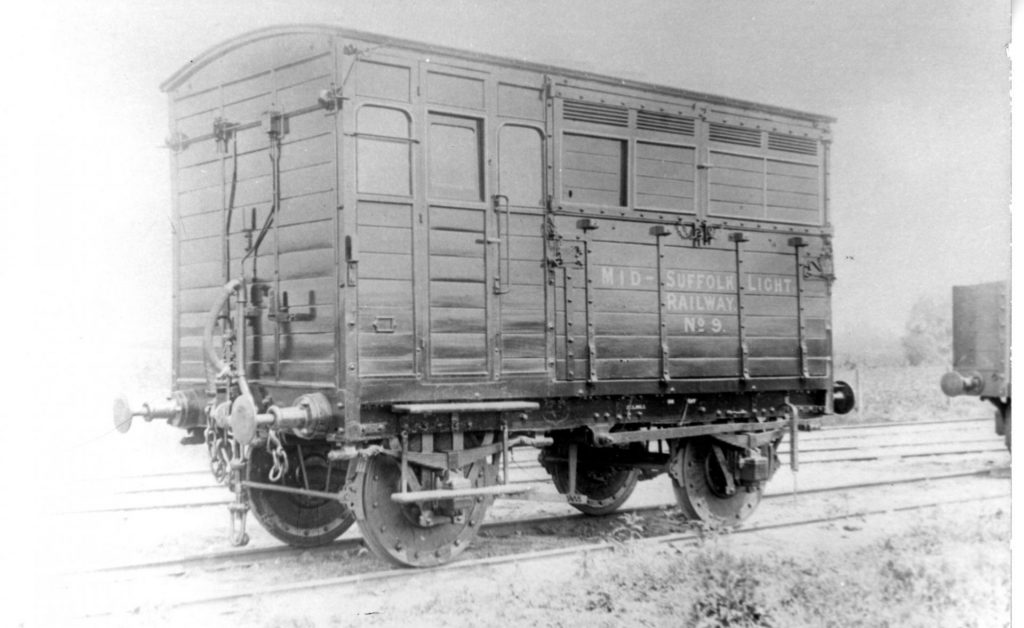 Horseboxes like this were used to transport racehorses, horses for the army, for hunts and individual owners. Horses were valuable – more so than the average passenger! – and justified the provision of special vehicles with accommodation for their grooms and storage space for harnesses etc. 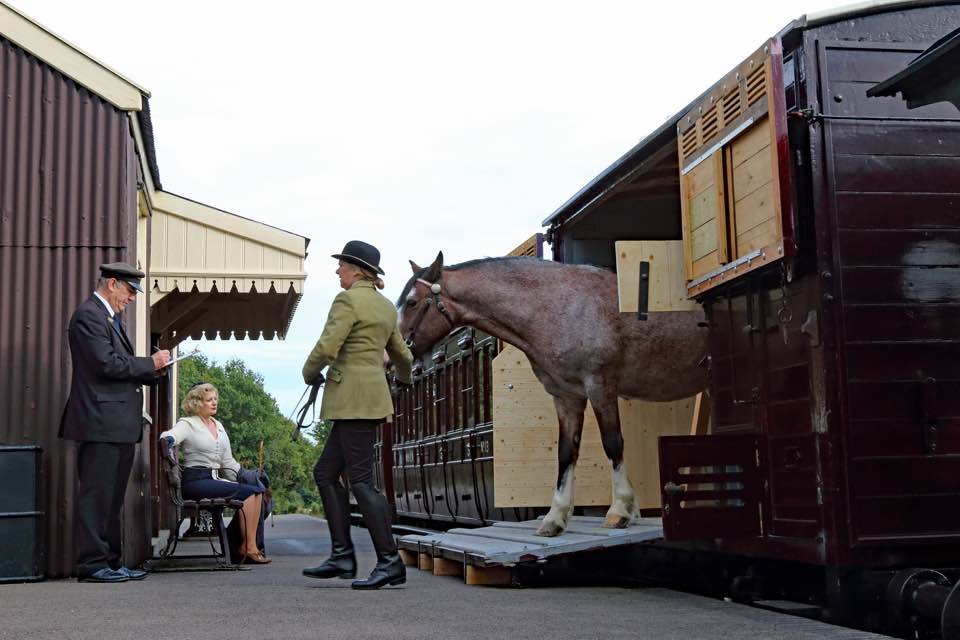 A re-creation at Brockford of what was once an everyday sight, as a horse is unloaded from a horsebox at a country station. Photo courtesy of John Holmes.

Horseboxes generally carried up to three horses, standing parallel to the track, facing the groom’s compartment and separated by removable partitions. The horse compartment was heavily padded to protect the animals while travelling, and the whole side could be opened up for loading & unloading: the lower part formed a loading ramp while the upper part contained ventilators and an inspection window. If a horse was unhappy at being confined in the horsebox, it could be accompanied by a ‘friend’ which might be a donkey or even a sheep!

Some horseboxes had a separate compartment for harnesses and other tack, but in no. 180 this had to fit in with the groom, who also carried fodder which he could supply to the horses while on the move. Sometimes a farrier would travel with the groom. There is also a dog box under the groom’s seat with external access doors.

No. 180 was withdrawn from service by the GER in 1896 and the body sold for £6. It had been in service for just over 25 years, and was replaced by larger, more modern horseboxes. 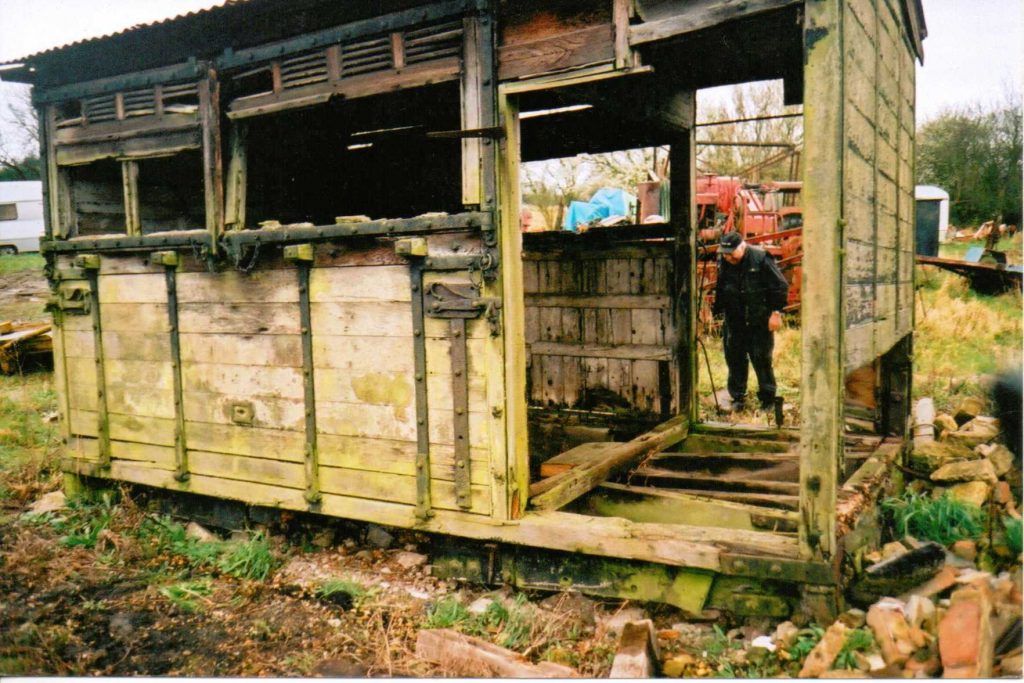 The body of GER horsebox no. 180 on a smallholding at Longstanton, Cambs, circa 1998. The horsebox is in a derelict state and has been used as a shed. Photo by Roger Gregory.

MSLR member Ivan Start discovered the body on a farm at Quy, Cambridgeshire, just as it was about to be burnt. It was in poor but restorable condition, and Ivan persuaded the owner to donate it to the Museum. It was stored for a number of years on a smallholding at Longstanton, Cambs, until the necessary resources were available to begin restoration.

The body of no. 180 was delivered to Brockford on July 20th 2002. Although it was in poor condition overall, enough had survived to make reconstruction a realistic proposition. In particular the important pieces of ironwork (hinges, catches etc.) had survived, though they all needed to be de-rusted, cleaned and refurbished. 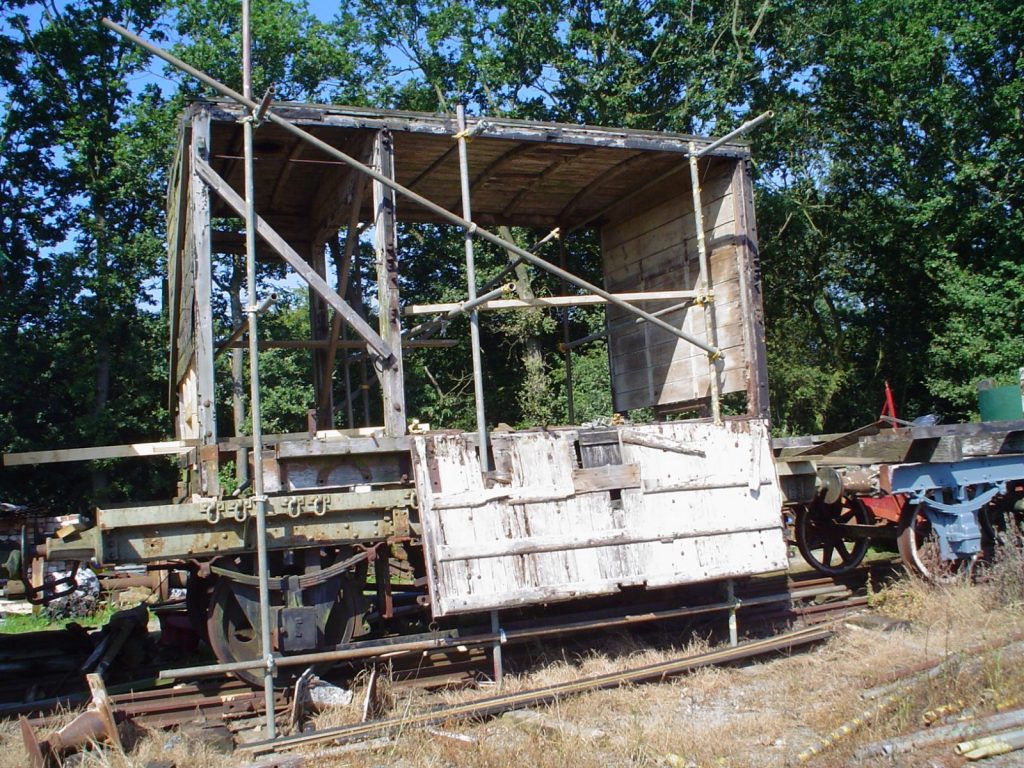 On 14th August 2004, restoration of the body has commenced, although at this stage all work has to be done outdoors. Photo by David Chappell.

The existing woodwork was re-used as much as possible, with hidden strengthening inserted where necessary. Some large sections of structural timbers were too rotten and had to be replaced, as have significant parts of the body panelling, internal partitions and fittings.

The body was going to need a new underframe and running gear (wheels, brakes etc.), and this came from a relatively modern flat wagon, built by British Railways to carry freight containers. The frames are steel as opposed to the original wood. The underframe had to be reduced in length to fit the horsebox body, by cutting a section from the middle and welding the two halves back together again. This is common practice in the restoration of vintage railway vehicles, to ensure that they meet modern safety standards. 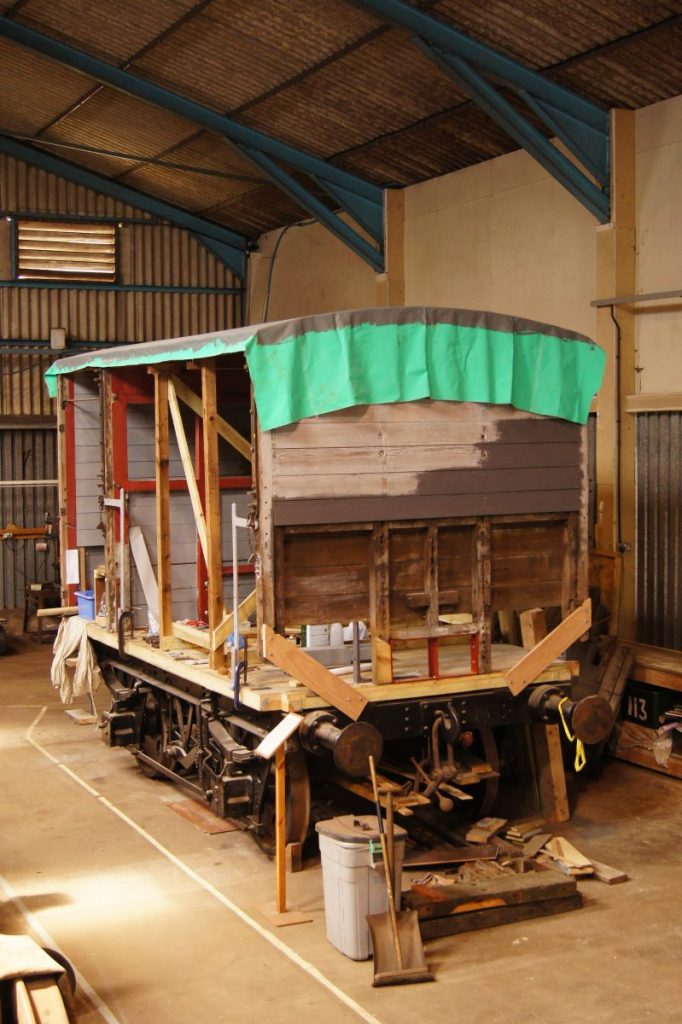 The partly-restored horsebox body mounted on its new chassis, 7th May 2013. Photo by Lawrie Rose.

Initially all work had to be performed outdoors which was obviously very difficult, but in 2008 the horsebox was moved into the workshops where restoration could proceed whatever the weather. Progress was now quicker, though always subject to the demands of other projects, the need to maintain other vehicles in everyday use on the demonstration line, and of course the supply of funds!

In 2012 the project won national recognition with a Restoration Award from the Transport Trust, who also gave a generous grant of £1000.

In 2014 the horsebox received its final coats of paint and its lettering identifying it as Mid-Suffolk Light Railway no. 15. Horseboxes are traditionally regarded as coaching stock rather than wagons and, like passenger coaches, were normally fitted with automatic brakes: 15 was the next vacant number after our existing passenger-carrying vehicles.

No. 15 (former no. 180) was officially unveiled and launched into traffic on May 26th 2014. Although we are unable to use it for its original purpose of carrying horses, the public has the opportunity to travel in the groom’s compartment whenever the horsebox is in service. 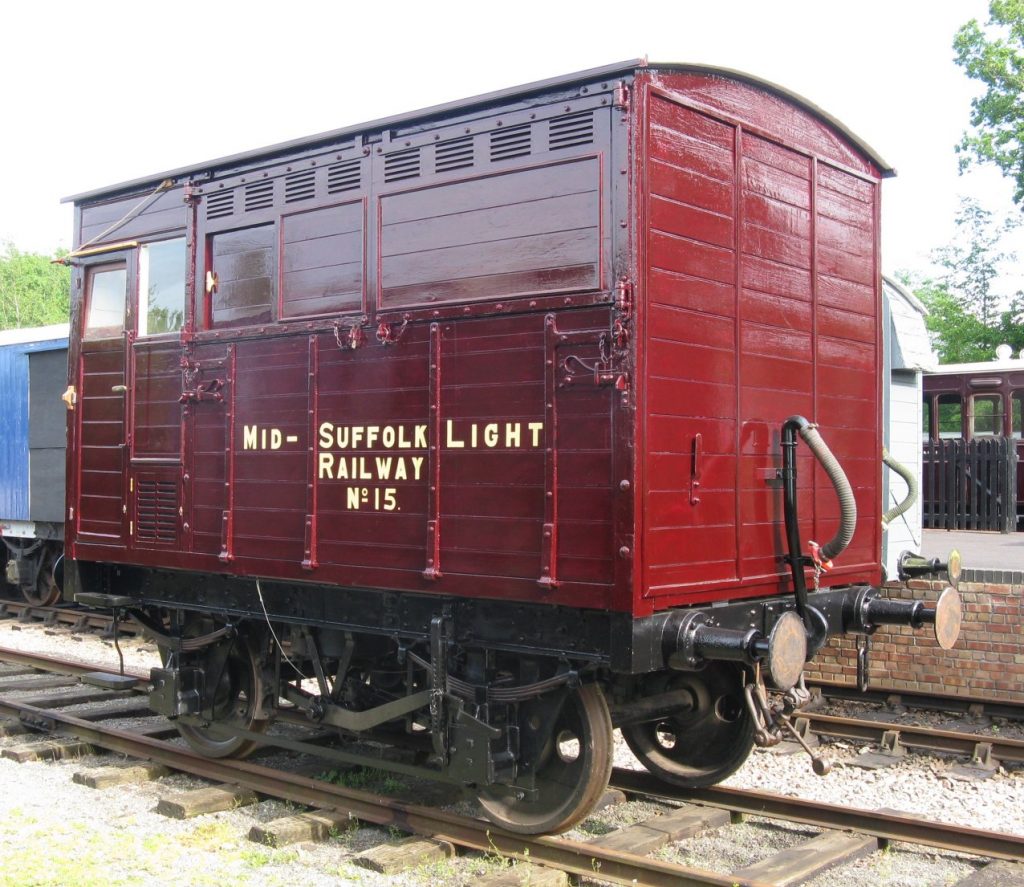 The restored vehicle on 21st May 2014, shortly before its official unveiling. Photo by Steve Crane.