Lord Kitchener and the MSLR

Horatio Herbert Kitchener was one of the most famous men of his time, who drew massive crowds wherever he went, and whose image was reproduced on countless biscuit tins, buttons and postcards. It was therefore rather a coup for the Mid-Suffolk Light Railway to persuade him to become their “first passenger” in 1902.

Born in 1850, Kitchener joined the army and swiftly rose to Commander-in-Chief of the Egyptian Army. In 1898 he won lasting fame as the victor of the battle of Omdurman, where he defeated the Mahdi and his Dervish army to avenge the death of General Gordon at Khartoum in 1885. In recognition of this, he was created Baron Kitchener of Khartoum and of Aspall in the County of Suffolk (his mother was a Chevallier and had been born at Aspall Hall).

When the Boers surrendered in 1902, ending the war in Southern Africa, Kitchener was the commander of British forces, and he returned home to a tumultuous reception, with further honours and promotion to Commander-in-Chief of the Indian Army.

When war broke out in 1914, Kitchener was appointed Secretary of State for War, and initiated a massive recruitment campaign to provide the troops needed to expand the regular army. As the military hero of the age, his image appeared on some of the most memorable recruitment posters. 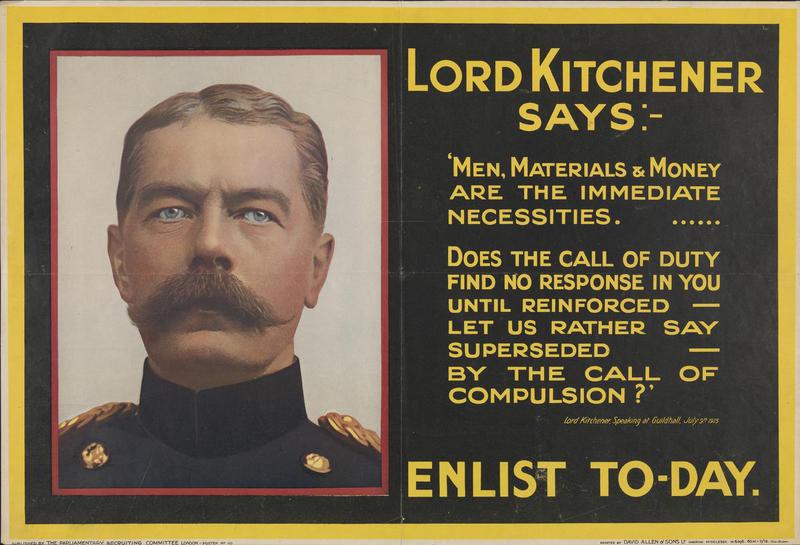 Kitchener died in 1916 when the ship on which he was travelling to Russia for military talks hit a mine and sank. The mysterious circumstances of his death only reinforced his semi-mythical status, and generated numerous conspiracy theories.

Kitchener and the Middy

In September 1902, as part of a programme of engagements in Suffolk, Kitchener was invited to stay at Aspall Hall by Mr John Chevallier, who was his cousin as well as a director of the Mid-Suffolk Light Railway. After lunch on the 23rd, the party drove in one of the earliest cars in the district to inspect the first completed section of the railway near Mendlesham (though some accounts say Brockford, and many newspapers got it completely wrong as Mildenhall!). 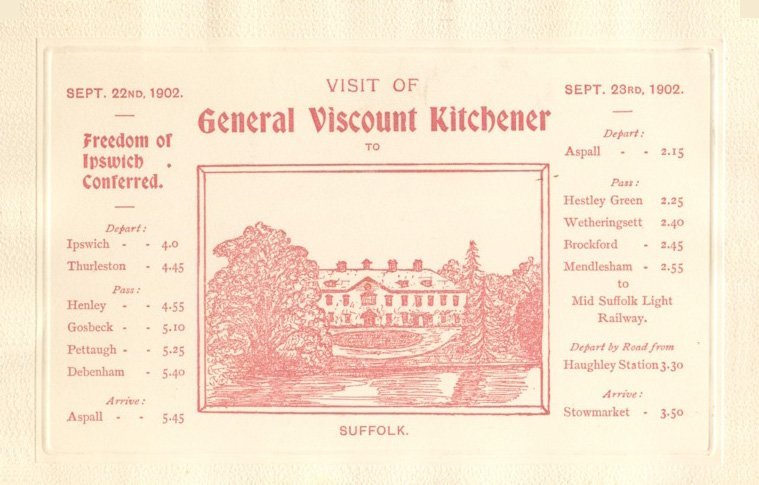 The programme for Kitchener’s visit to Suffolk on 22nd and 23rd September, 1902. The drawing shows Aspall Hall, where he stayed with the Chevallier family.

None of the stations had yet been built, so they waited at the trackside for a special train to arrive, made up of the contractor’s locomotive hauling two carriages (a saloon and brake) loaned by the Great Eastern Railway, all decorated with flags. This was a major event in the district and crowds had gathered to see the great man, including children who had been given the day off school.  It is said that the spectators kept trying to touch Kitchener’s coat-tails, much to his annoyance. 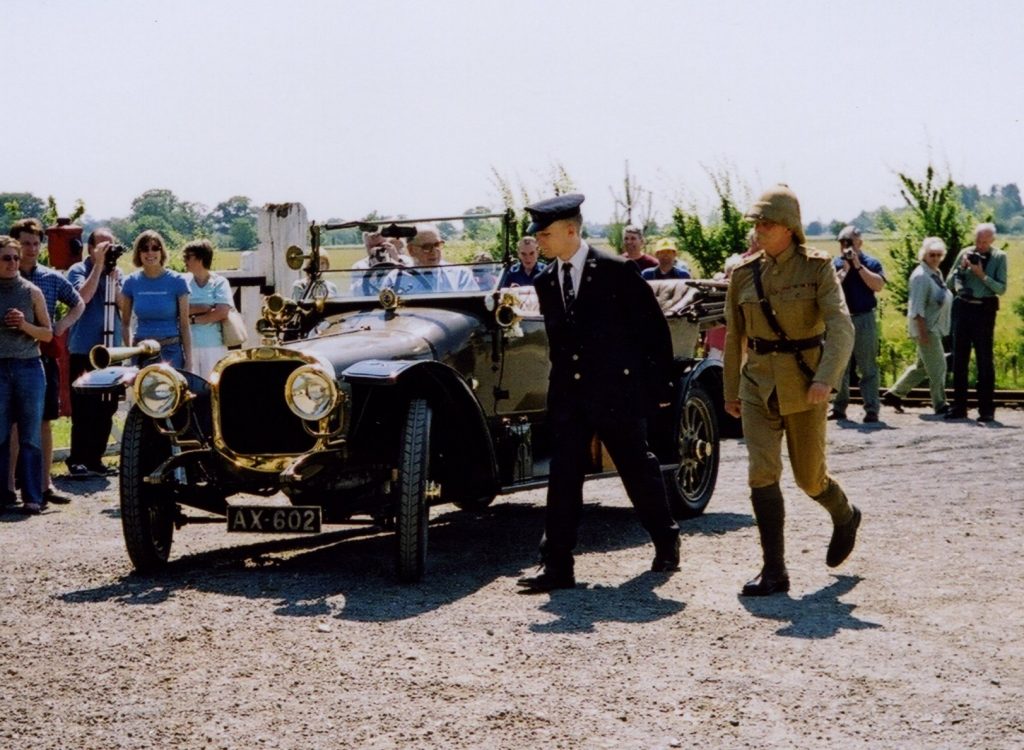 In July 2002 the Museum re-created Lord Kitchener’s trip on the MSLR one hundred years earlier. Here the great man, played by actor Peter Sowerbutts, arrives by car at Brockford where excited crowds have gathered. Photo by Paul Davey.

Kitchener then boarded the train to meet the other directors of the railway, with Francis Stevenson, the Chairman, greeting him as the “first passenger on the new line”, to which the great man responded by hoping the railway would prove successful. The train steamed to a temporary station near the main line at Haughley, where there were further ceremonies, including a toast “Success to the Mid-Suffolk Light Railway” before Kitchener departed by car for Stowmarket. 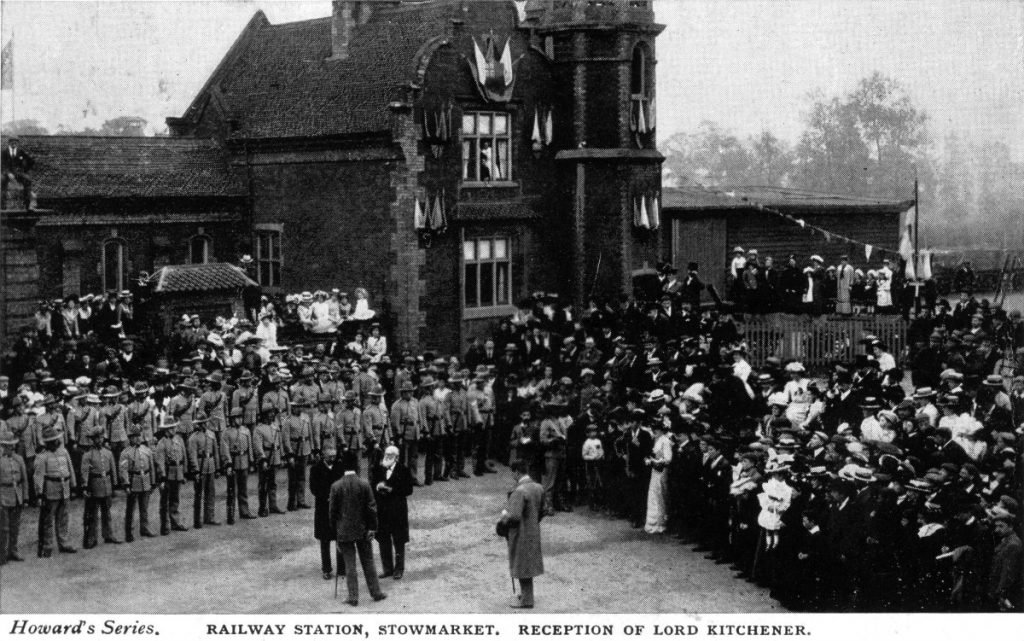 Back in 1902 events great and small were often recorded by commercial photographers who then sold picture postcards such as this one. Arriving at Stowmarket station on 23rd September 1902 after his trip on the MSLR, Lord Kitchener was greeted by civic dignitaries, volunteers of the Suffolk Regiment and hundreds of onlookers. Unfortunately the great man (in a grey suit and facing two local worthies) has his back to the camera!

Although the coach which Kitchener used in September 1902 has long since vanished to the great scrapyard in the sky, another coach which was probably used by him just a few years earlier does indeed survive, and is on display at the Chatham Historic Dockyard in Kent, a place well worth a visit in any case. 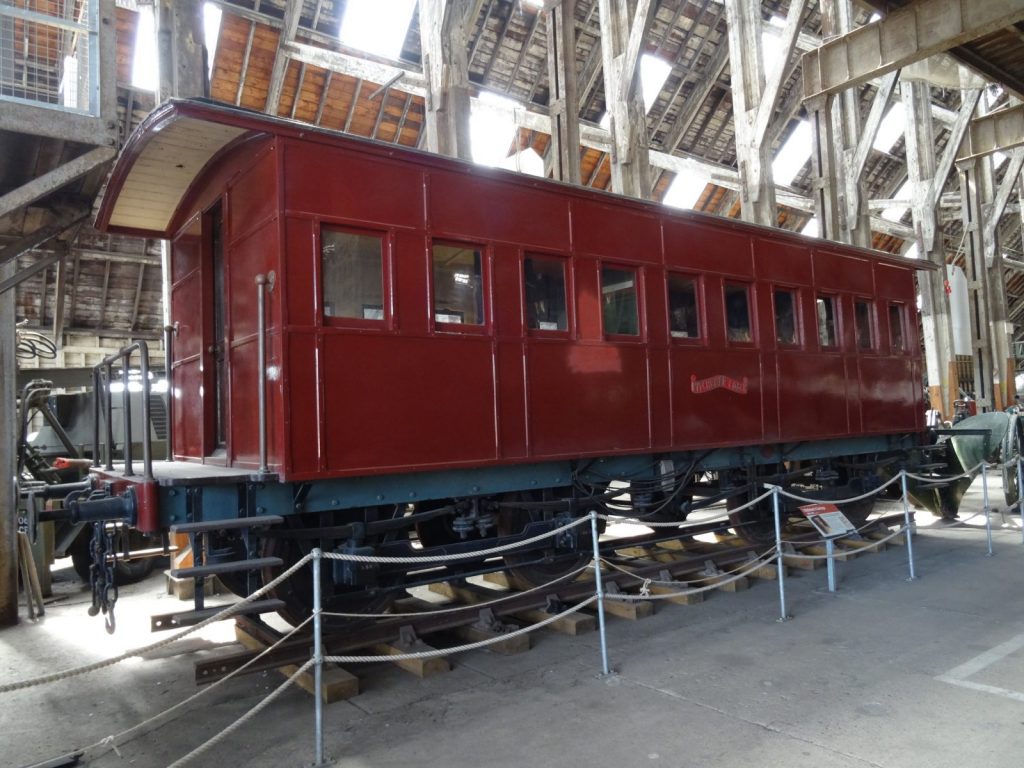 The ‘Kitchener Coach’, believed to have been used by Lord K in the Sudan during his 1896-98 campaigns. Preserved by the Royal Engineers Museum and displayed at Chatham Dockyard. Photo by Steve Crane.

The coach is an 8-wheel non-bogie vehicle, manufactured by the Metropolitan Railway Carriage and Wagon Company in Birmingham in 1885. It is owned by the Royal Engineers Museum (Kitchener was of course a member of that corps), and can be seen at the Dockyard alongside many other large artefacts from the RE Museum collection. It proudly bears on its side a cast plate announcing that it is the ‘KITCHENER COACH’, and is believed to have been used when Kitchener was the Commander in Chief of the Egyptian Army during the 1896-98 campaign to reconquer the Sudan.

The cast plate on the side of the ‘Kitchener Coach’. Photo by Steve Crane.

Its later history is also interesting: by 1910 it had been returned to the UK and was used at the artillery ranges at Shoeburyness, Essex, where it transported VIP visitors such as Winston Churchill and King George V.