Since 2015 the Museum has hosted an unusual resident locomotive, which has attracted a lot of attention. ‘Tram’ engine No. 2525 is very different from any other engine we’ve seen at Brockford, and here we look at the background to this type of loco and the company which built it.

Cockerill does not sound like a particularly Belgian name, which is not surprising because the founder of the firm, John Cockerill, was born in Lancashire in 1790. This was a time when British entrepreneurs were spreading the Industrial Revolution around the world. Moving to Belgium with his family at the age of 12, John and his brother helped to establish several manufacturing and mining businesses, including the factory where the country’s first steam locomotive, La Belge, was built in 1835.

John died in 1840 but his company lived on and diversified into a wide range of industrial activities, while continuing to build locomotives. Many of those which they constructed for Belgian State Railways were somewhat larger than No. 2525, including a class of Pacifics in 1928, and streamlined 4-4-2s for the Brussels – Ostend boat trains in 1938-39. They even built massive 2 ft gauge Garratt locomotives for South African Railways, one of which can be seen running on the Welsh Highland Railway between Porthmadog and Caernarfon. In the 1960s Cockerill’s started building diesel locomotives, and one of its successor companies still manufactures shunting engines (and much else besides, mostly unrelated to railways). 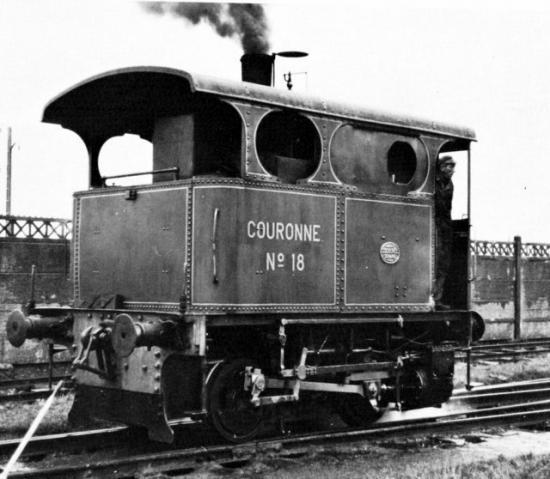 Locomotive Couronne No. 18 shunting at a cement works in Northern France in the mid-1960s. Photo by J.E. Beechey.

Although commonly described as a ‘tram’ engine, No. 2525 is actually a representative of the small locos which were once used for shunting industrial lines and sidings on the Continent. Its short wheelbase enables it to negotiate sharp curves, while small wheels (only 70 cm in diameter) allow it to pull heavy loads, albeit rather slowly!

The Cockerill company built over 890 locomotives of this type, to 5 different designs: the first was built in 1868 and the last one was delivered in 1949. The locomotive at Brockford is a representative of Type IV, of which 352 were built between 1883 and 1949.  Other builders also produced their own versions of this type, but in much smaller numbers. They were all distinguished from more conventional locos by their vertical boilers and well tanks.

These engines could be found in most European countries, from Spain to Russia and Sweden to Italy, and even in the French North African colonies. The great majority though worked in Belgium and France. Most of these engines were owned by companies which had their own private sidings or small railway networks. Typical users included cement works, mines and sugar factories.  A small number were also owned by main-line railways in France.

At least 35 locos of this type are known to survive in various states of preservation, and five of those are believed to be in the UK. No. 2525 was purchased in Belgium in the mid-1980s and for many years was stored in Norfolk. Finally restored to working order in 2014, the locomotive made its first public appearance on the Mid-Norfolk Railway before moving to its new home at Brockford.

One reason why these are often referred to as ‘tram’ engines is their resemblance to Toby the Tram Engine in the Thomas the Tank Engine stories. Toby was based on a real design of locomotive (LNER class J70) used on the Wisbech & Upwell Tramway, and at Ipswich and Yarmouth docks. Although superficially similar, the J70s were much more conventional underneath their wooden bodies, with horizontal boilers. To allow them to run on unfenced public roads, they were fitted with ‘skirts’ to hide their wheels and motion, cowcatchers and a bell, and were required to emit no smoke or steam (which was physically impossible!).

There is currently a project to convert another Cockerill loco (no. 1626) into a replica of Toby the Tram Engine, based on the Nene Valley Railway. 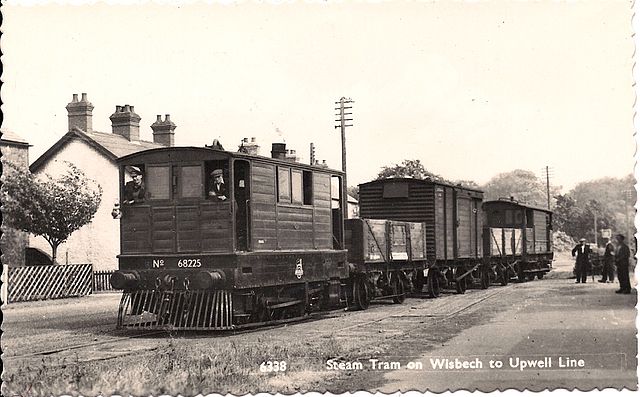