Trade Unions on the MSLR

The record books of the National Union of Railwaymen (the NUR) for the years 1897 to 1928, recently made available online, have revealed that almost eighty MSLR employees were union members during that period. It’s particularly interesting that many of these are people we’ve never come across before in any other source.

Railway companies in general had been strongly opposed to any form of combination by their employees, although some paternalistic companies did provide excellent benefits for their staff: the Great Western Railway Medical Fund Society, established in 1847, was held up as a model for the NHS which was created a century later. Railway unions were established as soon as this was legalised in 1871, and by 1913 the NUR as the largest of them had nearly 180,000 members covering all branches of railway service. The other two main unions were the Associated Society of Locomotive Engineers and Firemen (ASLEF), established in 1880 and covering footplate staff, and the Railway Clerks’ Association (RCA), later renamed the Transport Salaried Staffs’ Association (TSSA), founded in 1897 for clerical and supervisory staff. The unions’ initial objectives were to reduce the terrible accident rate, to cut extremely long working hours, and of course to ensure that members were paid a reasonable wage. Later the unions provided cash benefits including aid for widows & orphans, payments in the event of accident, disability or sickness, and naturally enough strike pay. 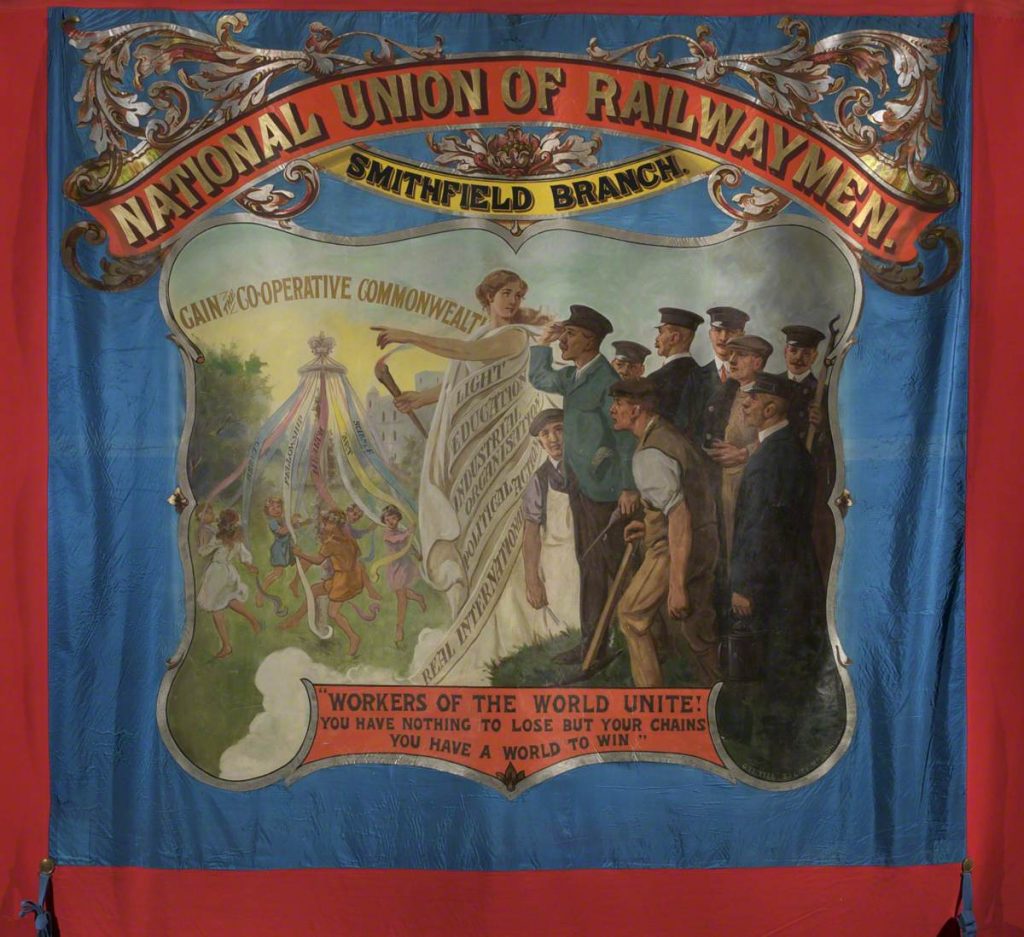 Banner of the Smithfields branch of the NUR, circa 1925. It is likely that the Stowmarket branch of the union, to which MSLR employees belonged, would have had a similar banner. © People’s History Museum, Manchester.

The First World War gave a great boost to the trade union movement in general, and the NUR in particular, with membership rising to 416,000 by the end of 1918. A dispute over post-war rates of pay in 1919 led to a national railway strike which resulted in standard rates of pay for each grade of employee across all the 100+ companies. The 1921 Railways Act which created the “Big Four” grouped companies also saw the three main unions recognised as the negotiating bodies for railway staff, and set up a statutory scheme of local and national negotiating machinery.

There is no record of any MSLR employee joining a trade union before the First World War, which is unsurprising since the MSLR had been in receivership since 1906 and was hardly in any position to improve its admittedly poor terms of employment. However all of that changed very quickly, starting in March 1915 when fifteen Middy platelayers & gangers joined the Stowmarket branch of the NUR. This must have been the entire complement of the railway’s track workers! By this time, of course, most railway companies, including the MSLR, were under government control, and the unions were negotiating substantial pay rises for all staff, reflecting both the vital role of railways in the war effort and rampant price inflation. 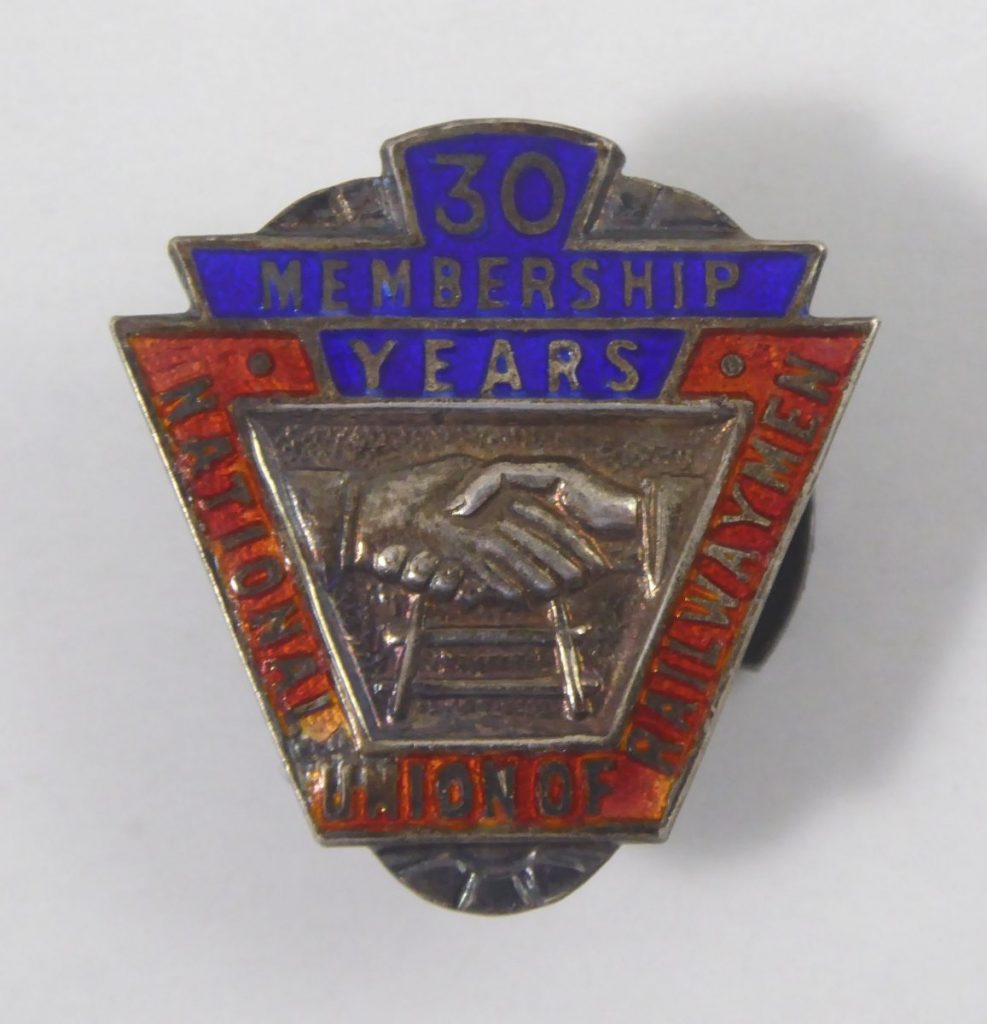 Badge awarded after 30 years membership of the NUR. From the MSLR Museum Archives.

By the end of 1919 a further 64 members of MSLR staff had joined the NUR, representing all grades including Gate Lads, Porters, Station Masters, Guards, Cleaners, Firemen and Drivers. Many of these were recent school leavers, some as young as thirteen, who took the place of men serving in the forces until they themselves were called up in turn. By the end of the war, some 49 Middy employees were members of the NUR, representing a clear majority of the sixty or so staff.

The desire of Trade Unions to bring about radical changes in society was not generally matched by their attitudes towards women. The NUR (actually one of the most advanced in this respect) grudgingly allowed women to join from June 1915, though this was seen as a temporary emergency measure: entries for women workers in the membership registers were written in red ink which stood out from the normal black ink used for men. Interestingly we have the membership record for one of the few women employed by the MSLR. As Peter Paye records in his book, Miss Victoria Evalyn (“Eva”) Oakes was employed as a porter at Laxfield during the First World War, but she was a member of the NUR from January 1919 until June 1921, showing that her railway service continued for some considerable time after the Armistice. 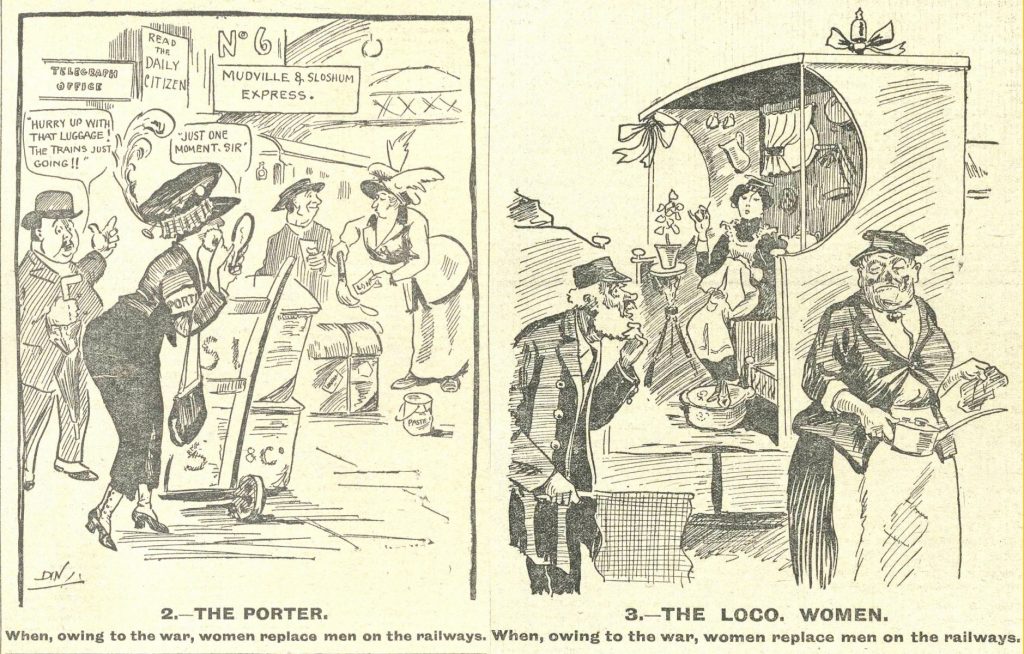 These cartoons from April 1915 editions of the NUR’s journal, the Railway Review, shows the union’s attitude to women railway workers.

In August 1921, control of the railways was finally handed back to their private owners, who struggled to deal with the increased wages and reduced working hours conceded to their staff by the government, while passenger fares and goods rates had been held down. The MSLR of course struggled more than most, with its 1921 expenditure of over £19,000 compared to receipts of only around £14,000. At a mass meeting of staff at Haughley station in March 1921, the railway’s Receiver & Manager, Mr Alexander Preston Parker, put forward proposals for drastic reductions in wages ranging from 14% (for Firemen) to 29% (for Undermen, ie track workers). We don’t know what was said at this meeting, but we can guess that the alternative was closure of the line as there were very few other areas where savings could be made. In any case, the staff agreed to the pay cuts, and this was formally recorded in a memorandum which lists the staff representatives as NUR officials J. Holmes, J.C. Allen & W. Race, and from the MSLR senior Driver Alec Boag and Guard Peachey Betts. Boag had been an NUR member since December 1917, and Betts since January 1916. After the LNER had absorbed the MSLR in 1924, the larger company agreed to restore the standard national wage rates, although the continuing decline in traffic resulted in several staff being made redundant or having to transfer away from the branch. For more details of this episode, see my article in Making Tracks Issue 100, dated Winter 2016. 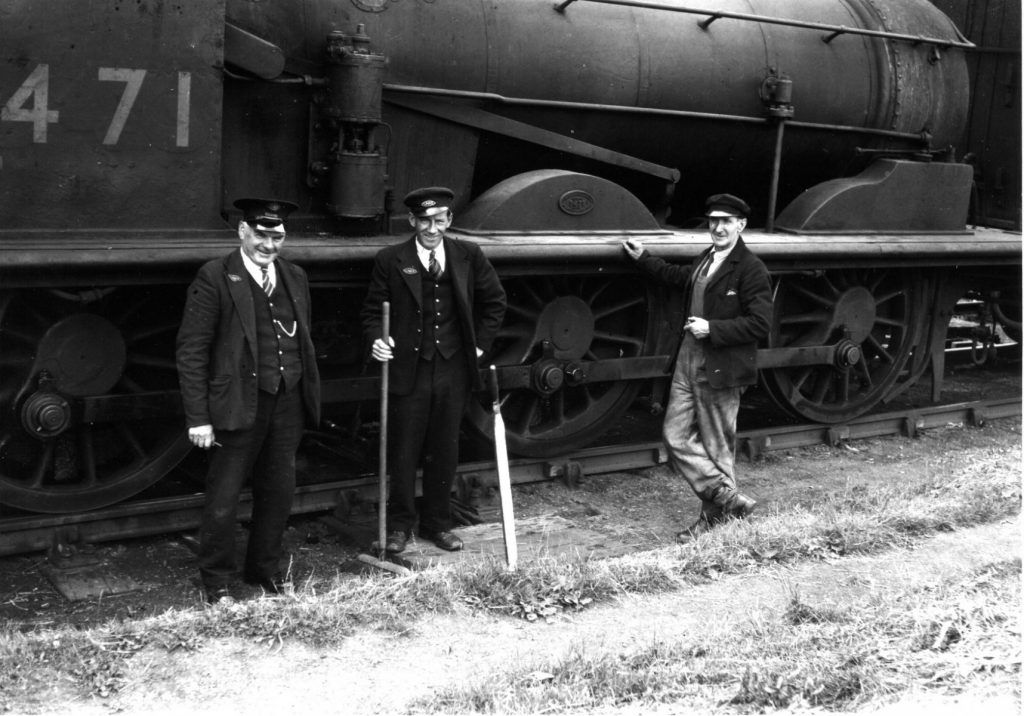 On the left is Guard Peachey Betts, NUR member between 1916 and 1927, and one of the MSLR staff representatives at the time of the pay cuts meeting in March 1922. The other two men are Porter Frank Hubbard of Laxfield, and Driver George Rouse. Photo taken in 1947 by Dr Ian C Allen, courtesy of Mrs P Wickes.

Unfortunately the NUR record books from 1929 onwards are not available, but we do know that several of the MSLR staff who joined the union in the period up to 1919 retained their membership until retirement or death in service, including Driver Alec Boag, Porters Albert Borrett, Tom Hambling & Walter Thorndyke, and Platelayer Allen Pleasance. On the other hand, some long-term Middy staff let their union membership lapse quite quickly, for example Guards Peachey Betts & Willis Keable, Driver Cliff Bloom, and Clerk (later Station Master) Edgar Gladwell. A complete list of all the MSLR staff known to be NUR members, together with their joining and leaving dates, is given below.

Note: The leaving dates in the above table should be treated with some caution, it appears that sometimes membership was not formally closed until a considerable time after the person concerned had actually left the union.