The Mid-Suffolk Light Railway was originally envisaged as a way of opening up the central areas of Suffolk to the rest of the county and the country. Mid-Suffolk was made up predominantly of farming communities, but ones which were quite far from the larger local markets in Bury St. Edmunds, Stowmarket and Ipswich. 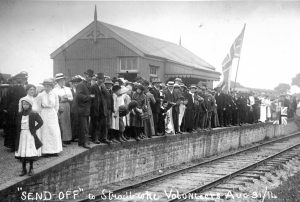 Stradbroke villagers preparing to ‘send off the boys to the front’ August 1914. It will all be over by Christmas.

The government’s Light Railway Act was passed in order to enable such areas of the country to benefit from ‘railwaymania’, the railway-building craze of the 1800s, by authorising entrepreneurs to set up cheaper railways of lighter construction with less rigid safety restrictions. The Mid-Suffolk Light Railway was one such line.

The original plan for the MSLR was for it to cross central Suffolk from Haughley on the Great Eastern Railway’s main line to Halesworth on the same company’s East Suffolk line, with other connections with the GER at Needham Market and Westerfield. However because of financial difficulties, managerial issues and some disagreements with the GER the line was curtailed 19 miles east from Haughley (where construction started) at Laxfield. 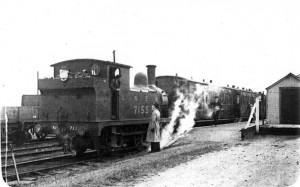 The branch to Needham had been abandoned before construction started and although track was laid from the main MSLR line towards Westerfield, it finished just outside Debenham and was lifted after a few years.

The line, bankrupt before it opened for business, struggled on independently until it was absorbed into the London and North Eastern Railway in 1924 (the LNER didn’t want to take over the line  during the grouping of 1923, so waited until the MSLR’s financial situation was resolved the following year). The ‘Middy’ finally became part of British Railways at nationalisation in 1948.

As the line was in a poor state of repair following the strains of WWII and the number of people using its services were declining, the MSLR (or the Haughley – Laxfield branch as it was under the LNER and BR) closed in 1952, well before the Beeching cuts. 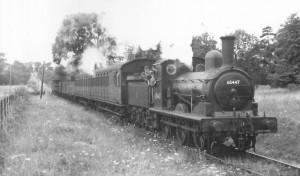 However, in 1990 a group was set up with the aim of preserving the memory of the MSLR on the site of the old Brockford Station cattle dock, a wall of which was still standing in the corner of a field. Despite the whole line being taken up in 1953, all the rolling stock scrapped and the buildings scattered around the county in various states of dereliction, the Mid-Suffolk Light Railway Museum, a registered charity, has created a popular tourist attraction dedicated to remembering what was affectionately known as the ‘Middy’.

Now boasting a purpose built refreshment room, shop, museum and the Kitchener Arms, a real ale bar coach, with workshop and restoration locomotive shed, authentic rolling stock, some original buildings and a demonstration line, the MSLR Museum recreates a slice of Edwardian railway travel that everyone can enjoy.

For more information on the ‘Middy’s’ history visit the History pages on this site.