This is a representation of the sort of privately owned wagon which would have been a common sight on the MSLR. Thomas Moy was a coal merchant based in Colchester with coal grounds at many stations in eastern England. Moy’s operated coal depots at several Mid-Suffolk stations.

The words “Empty to Toton Sidings” on the side of the wagon means it was to be sent to the East Midlands to be loaded with coal from collieries in the Nottinghamshire and Derbyshire coalfields. Although not authentic for this type of wagon it is fitted with automatic brakes so it can run in passenger trains. 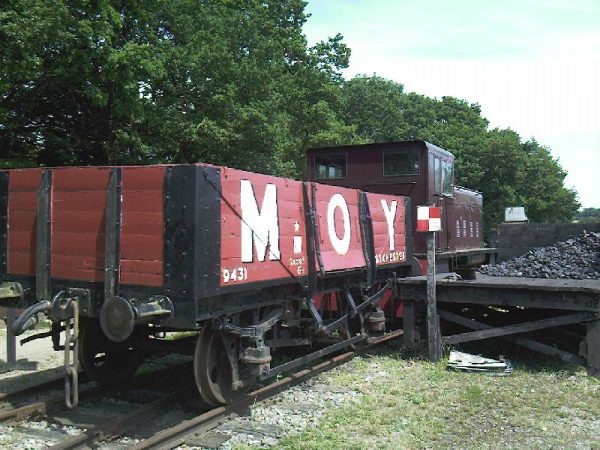 This vehicle, also known as a Toad B brake van, arrived on-site in 1995 having been damaged in a fire started by vandals just days before. It entered traffic on the MSLR in 1999 and has been used every year since, first in passenger trains and in recent years more often as part of a demonstration goods train.

It is fitted with automatic brakes which, although not authentic, give it extra operational flexibility. Similar brake vans would have run on the MSLR from the time it was absorbed into the LNER until closure.

This vehicle has been used by Hornby as the basis for their soon to be released Toad model. 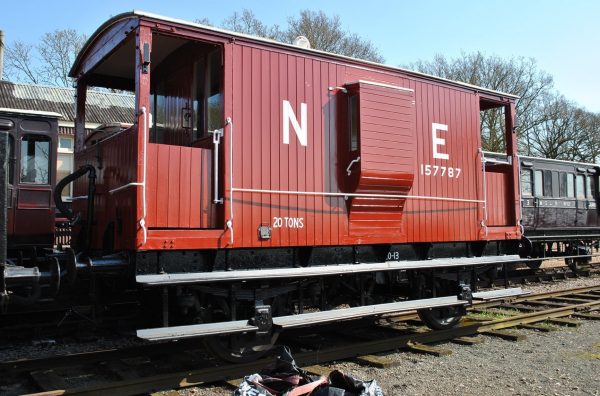 This vehicle wears a special GER livery with red end panels on each side to show it is fitted with automatic brakes. This would have allowed it to run in fast goods or passenger trains and it can sometimes be seen in the latter on the MSLR. Being a ventilated van means it is suitable for carrying perishable goods. 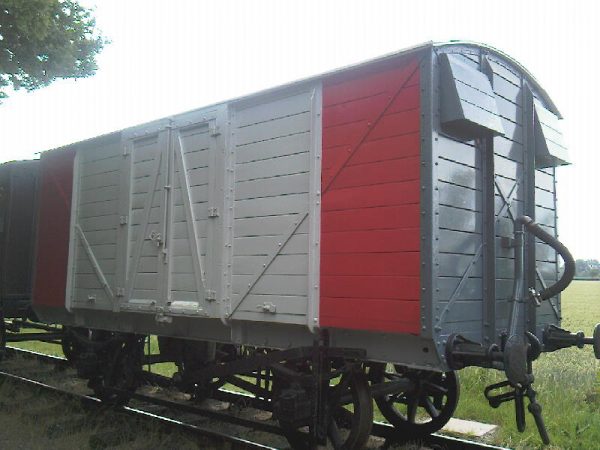 Another vehicle that would have been common across the MSLR, this 5-plank wagon was originally built in 1902 and restored by ‘Middy’ volunteers. In commercial service it would have carried all manner of general merchandise up to a maximum load of 10 tons. 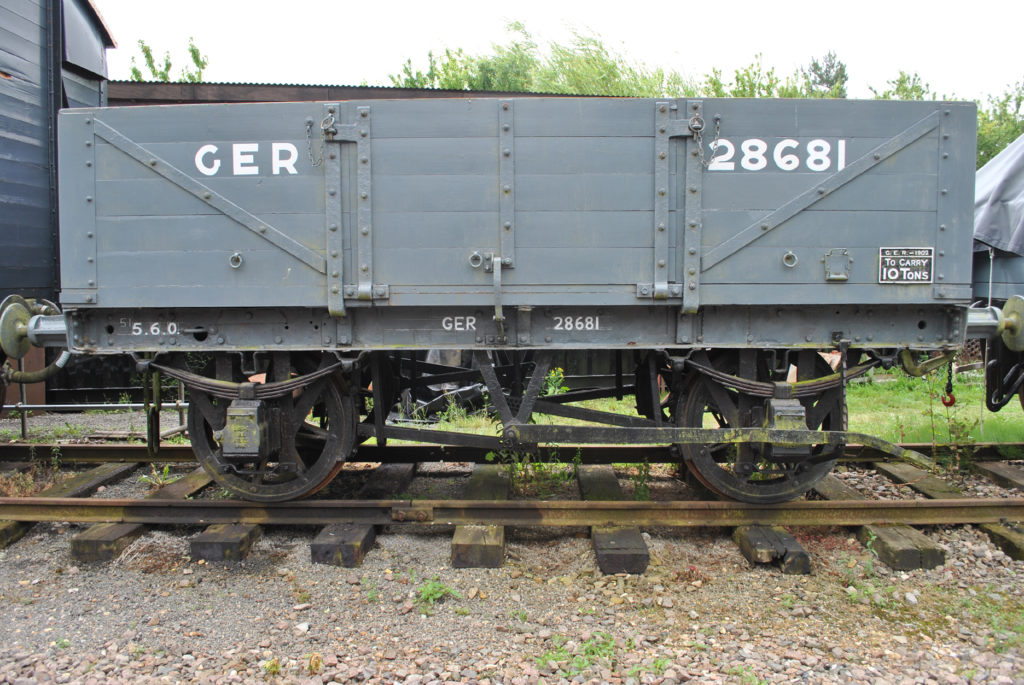 This vehicle was originally a Great Eastern Railway 7-plank open wagon, used for carrying general merchandise. It was built at Stratford Works of the GER in 1908, and was numbered 5043. Like many other such wagons, it was requisitioned by the Government during WW2. It was purchased privately in the 1970s and moved to the West Somerset Railway, from where it was eventually donated to the MSLR. It arrived at Brockford in 1995 in a poor condition, and had been cut down to 5 planks. Restoration by the Carriage and Wagon volunteers commenced in 2005 and the wagon was brought into service in 2011. It carries the large ‘G’ ‘E’ letters as used by the GER after 1903. 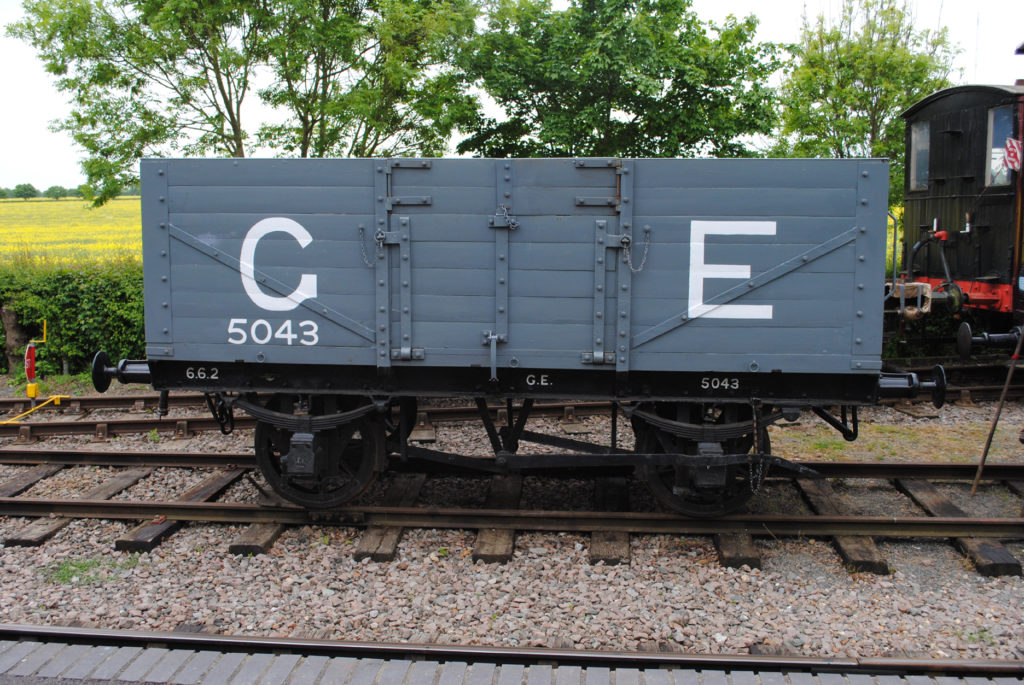 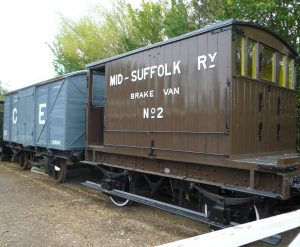 This was an early Midland Railway 4-wheel brake van with a single ended cabin and one door to the balcony. The Middy acquired the body from the Midland Railway at Butterley some years ago, but it had to wait until 2018 for restoration to begin once a suitable metal under frame had been sourced from the Northampton & Lamport Railway.

The outer cladding was in poor condition, but most of the frame was re-used. Nonetheless a considerable amount of metalwork still had to be fabricated by skilled craftsmen from our own Workshop.

Whilst not a genuine Mid-Suffolk Light Railway vehicle a very similar brake van was in service on the Middy in pre-LNER days.