This unique vehicle dates back to 1863 and is the oldest surviving GER carriage in preservation. It was discovered in a garden in Elmswell where it was being used as a shed. It was bought by a consortium of MSLR members in 1995 but only minimal restoration was carried out to prevent further deterioration until 2014 when the consortium generously presented it to the MSLR and the major restoration work began. Two years and £10,000 later the beautifully restored body was united with a newly fabricated chassis to complete over 20 years of work and t.l.c.

Originally designated as a First Class Smoking Coach, it can no longer be used for it’s original purpose, but as a valuable addition to our coaching stock 140 is ready to take its place as the third coach in the Middy train. 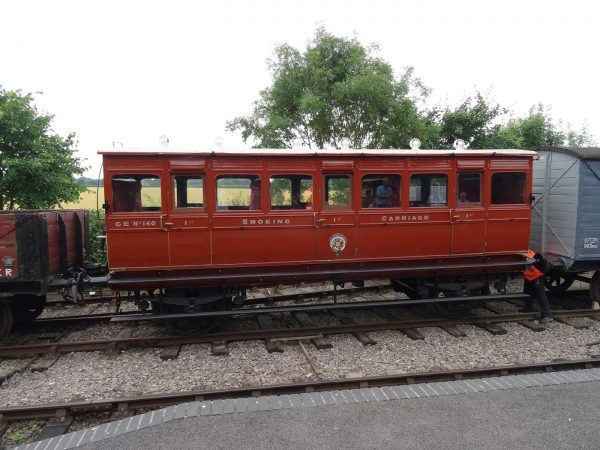 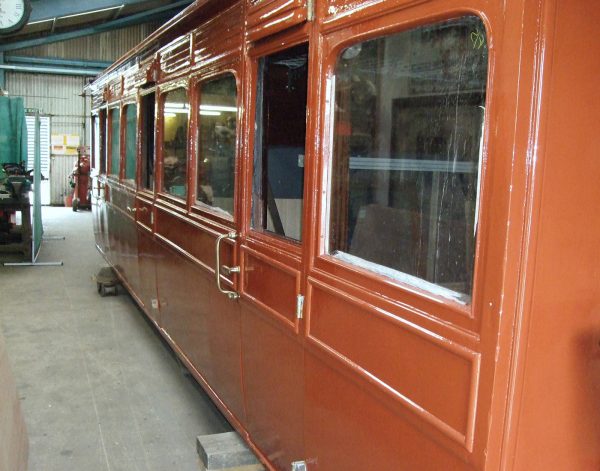 Great Eastern Railway no.140 in the works shed during restoration. 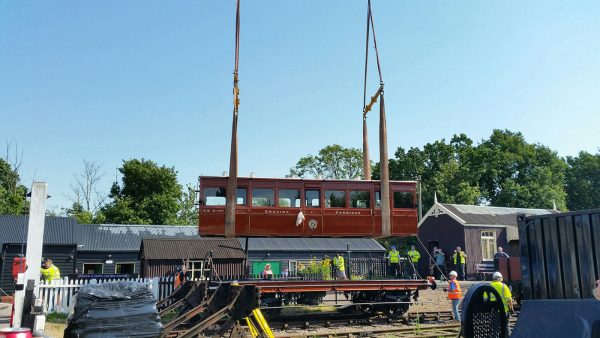 Great Eastern Railway no.140 coach being lifted on to it’s chassis.

Great Eastern Railway no.140 being lifted on to it’s chassis

The MSLR’s first two coaches were restored by volunteers to their current operational condition, no.12 in 2002 and no.13 in 2009 respectively. They are former Great Eastern four-wheeled wooden-bodied coaches and between them provide for first and third class passengers as well as a guard.

Both coaches are very similar to those originally used by the MSLR – in fact No. 12 is the sister vehicle to one which was ordered by and ran on the line.

No. 13 was originally a 5-compartment third class coach, but has been modified to include a first class saloon in place of two third class sections. The original MSLR also made this modification to one of their vehicles so the saloon could be used by the line’s superintendent, Mr Gillingwater.

Because of the similarities between these coaches and the original MSLR vehicles, Nos. 12 and 13 are two-thirds of the museum’s ‘Middy Train Project’ which is aiming to recreate an authentic ‘Middy’ three coach train. 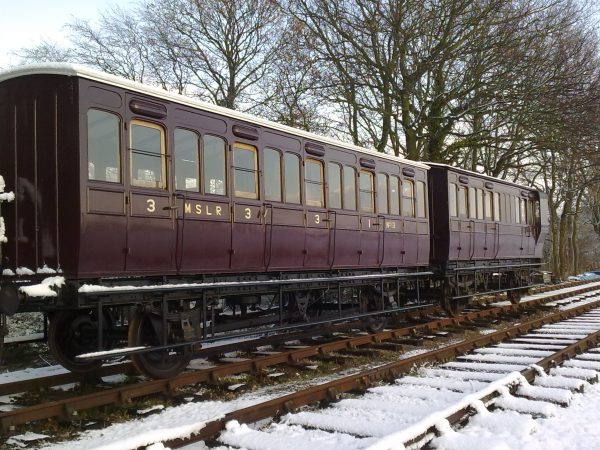 Formerly Great Eastern no. 180, this is the oldest railway horse box in the country and recently returned to traffic (June 2014) after an extensive restoration by MSLR volunteers. It dates from 1869 and was in derelict condition when it arrived at Brockford. It has been numbered as the next vehicle in the original MSLR numbering sequence, along with our coaches.

Again it has been restored as a ‘Middy’ vehicle, rather than in its original form, replicating the practices used by the railway to give second-hand vehicles their own branding.

This is a very significant piece of national railway heritage and because of its age it is not used on every operating day. When it is in service though you will have the chance to ride in the grooms’ compartment of this important historical vehicle.