Coach No. 12, a two-compartment Brake Third, was the first passenger vehicle to be restored by the Museum, and has been in service from 2002 to the present day. Sister to a carriage which ran on the original MSLR, it was retired by the Great Eastern Railway in 1910 and spent over 80 years in a field before being rescued.

In the summer of 1992, the fledgling Mid-Suffolk Light Railway Society was contacted by a Mr Brunt who lived in Shottisham, a village some 4 miles south-east of Woodbridge. He owned an old railway carriage body which had been lived in for around 70 years, but which was now unoccupied, and he wondered whether the Society would be interested in acquiring it. Paul Davey and David Chappell, then Chairman and Vice-Chairman respectively, visited the site and discovered that the body was from Great Eastern Railway coach No. 13, a Brake Third. Remarkably, this was a sister vehicle to one owned by the original Mid-Suffolk Light Railway, who had purchased No. 14 from the GER in November 1904! 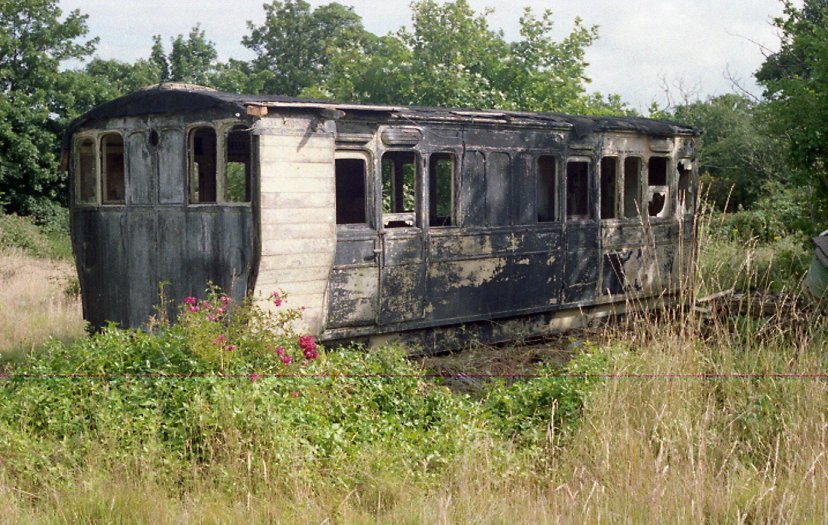 GER Brake Third coach No. 13 as ’discovered’ in a field at Shottisham. Photo by David Chappell.

Paul and David quickly accepted Mr Brunt’s kind offer, but were now faced with the problem of moving the carriage body to Brockford. At that time, there was no way that the Society could afford professional crane hire and lorry transport, and the fact that the coach was in the middle of a field with no road access made things even more difficult. Luckily the Army came to the rescue, and the Royal Electrical and Mechanical Engineers (REME) agreed to take on the job as a ‘training exercise’, with the Society covering nominal expenses.

And so on the sunny morning of Monday July 19th 1993, the REME team arrived at Shottisham with a massive lorry-mounted crane. They managed to get slings under the coach body, and lift it onto a flat bed trailer. After that, it was a relatively straightforward job to transport the body to Brockford, where it was safely offloaded onto the ground. 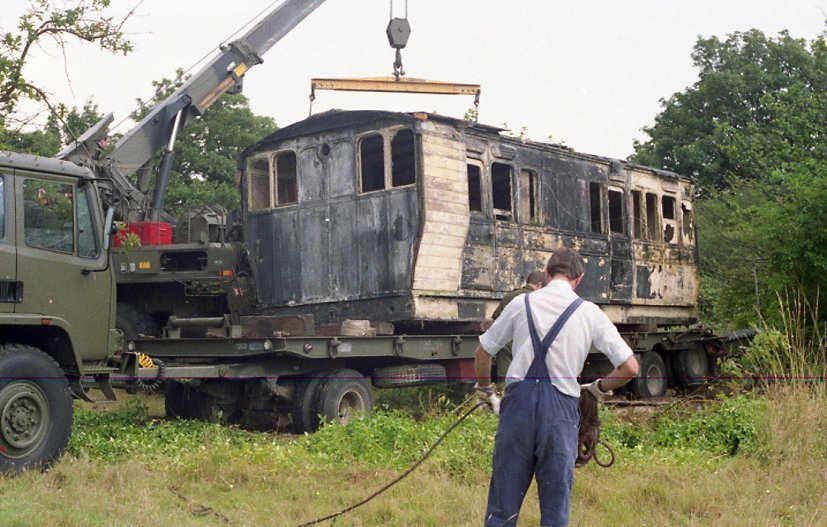 The body of GER coach No. 13 being recovered from Shottisham by Army engineers, 19th July 1993. Photo by David Chappell.

It must be remembered that, in those early days of the MSLR Museum, the Society had limited funds and relatively few volunteers, so it was not possible to start restoration work straight away. However, it was possible to research the history of the carriage, and John Watling, President of the Great Eastern Railway Society and a veritable expert on GER carriages, was able to provide a lot of information. Our coach was built in 1875 by the Metropolitan Carriage & Wagon Company of Birmingham, to GER Diagram 501. It was originally on a 4-wheeled underframe, with 2 compartments for Third-Class passengers and a brake compartment for the Guard and luggage. The original cost was £275. It was withdrawn from service by the GER in 1910, after which the body was sold for £9 and moved to the field at Shottisham, where it was converted into living quarters which were occupied for over 70 years. The carriage then remained in the same location, unoccupied, for another 13 years. 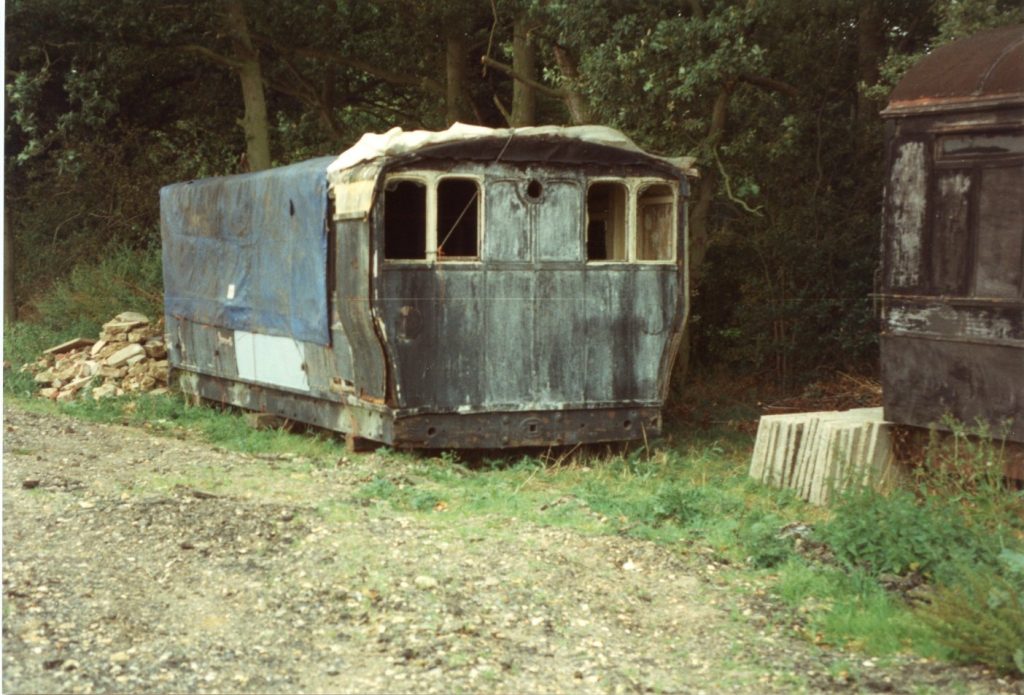 The body of GER coach No. 13 at Brockford shortly after arrival, on 12th September 1993. Photo by Dennis Ash.

A replacement underframe, complete with wheels, brakes etc, was needed to allow No. 13 to run again. As in most restoration projects of this type, a more modern steel underframe would be used. In 1995 an ex-BR 20 ton brake van, No. B955147, was purchased by Rob Murray from a scrap dealer, arriving at Brockford on June 1st. The intention was to use the body for the restoration of the Toad B brake van, and the underframe for the re-wheeling of coach No. 13. A few months later, another ex-BR brake van, No. B951759, was purchased from the same source by the consortium restoring coach No. 140. Eventually it was agreed to use the underframe from this second brake van for coach No. 13, as it had oil axle boxes which were more appropriate for a former GER coach, as opposed to the roller bearing boxes on B955147. Over the Christmas 2001/New Year 2002 period, the underframe of B951759 was shortened by 1 foot 3 inches to fit the coach body, and vacuum brakes were installed. 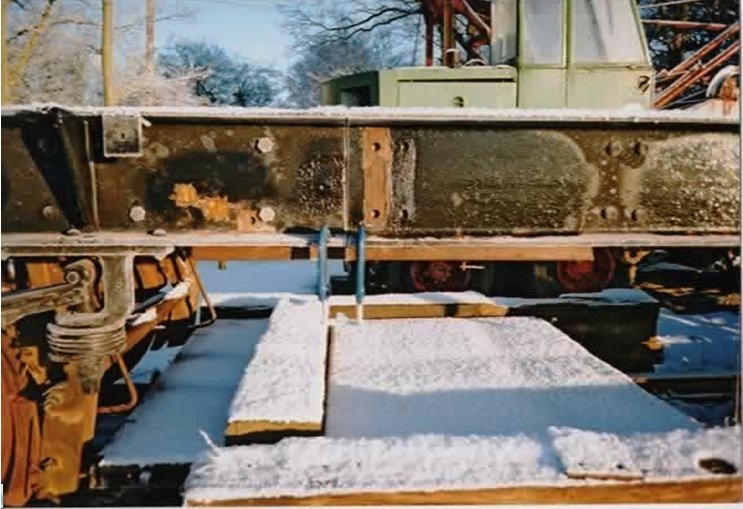 The underframe for MSLR coach No. 12, originally from a BR brake van, being shortened during the winter of 2001/2002. Photo by Roger Gregory.

Meanwhile, restoration of the carriage body had been proceeding steadily for a number of years. The interior was re-created with two passenger compartments, fitted with plain wooden seats, and the guard’s compartment with hand brake and emergency vacuum brake handle. Body and underframe were united in June 2002, and after final painting and fitting out, the carriage was ready in time for the 50th Anniversary of Closure celebrations in July 2002. It has continued to be a mainstay of the railway’s passenger services ever since.

The original Mid-Suffolk Light Railway Company purchased sister vehicle GER No. 14 in 1904. It was converted to a Full Brake (ie all the passenger accommodation was removed) by the GER works at Stratford before delivery to the MSLR. It then became No. 1 in the MSLR coaching Stock List, which included seven passenger coaches (Nos. 2 to 8) and two horse boxes (Nos. 9 and 10). As the Museum has continued to number its coaches in the original Stock List series, the new coach (ex-GER No. 13) was given MSLR No. 12 (MLSR No. 11 had been allocated to another coach acquired in the early years of the project but then transferred to Society President Tony Alston).

Acknowledgements: this is based on articles by David Chappell which appeared in Making Tracks Issue 94 (Summer 2015) and Issue 95 (Autumn 2015), with additional information provided by Roger Gregory and Rob Murray.