Directors of the MSLR – JB Chevallier

JB Chevallier was perhaps the most conscientious director of the Mid-Suffolk, attending nearly every meeting of the Company’s Board. He is certainly the only director to have played in four FA Cup Finals! He was also more canny than most of his fellow directors, limiting his personal financial investment (and ultimately losses) in the company.

The Chevallier family were Huguenots (French Protestants) who fled France after the St Bartholomew’s Day Massacre in 1572, eventually arriving at Aspall in Suffolk, where Clement Chevallier established a cider-making business. John Barrington Trapnell Chevallier (widely known as JB) was born in 1857 at Aspall Rectory, the eldest son of the Rev Charles Chevallier and Isabella nee Cobbold. He was educated at Eton and King’s College, Cambridge where he gained a first class degree in mathematics. After graduating, he worked for 5 years as a master at various public schools. It was during this period that he distinguished himself as a footballer, playing as a forward for Old Etonians. He was part of the teams that won the FA Cup in 1879 (playing Clapham Rovers in the final) and 1882 (where they beat Blackburn Rovers). He also played on the losing side in the 1881 and 1883 finals. When Derby County football club was founded in 1884 he played for them at centre-forward, scoring a goal in their first home game and scoring a hat-trick against local rivals Nottingham Forest. 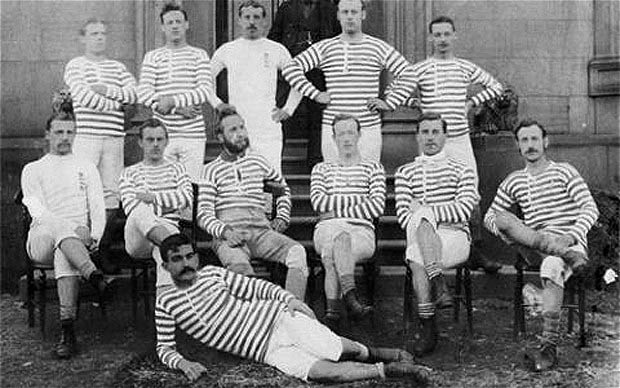 A flourishing football career was cut short when his father died in 1885, and he returned to Aspall Hall presumably to take over the family cyder business, although in the 1891 census his occupation is declared as “Magistrate and Tutor”. In 1901 he is described as a “Tutor and Farmer”, and only in 1911 does he become simply a Farmer – he was clearly proud of his academic talents. His farming interests were wide-ranging: he kept a pedigree herd of Red Poll cattle and bred Suffolk horses and pigs, and was heavily involved in the farmers’ co-operative movement, helping to found the St Edmundsbury bacon factory at Elmswell. He is also credited with changing the spelling of cyder, replacing the usual “i” by “y” to differentiate the Aspall brand from those made elsewhere. 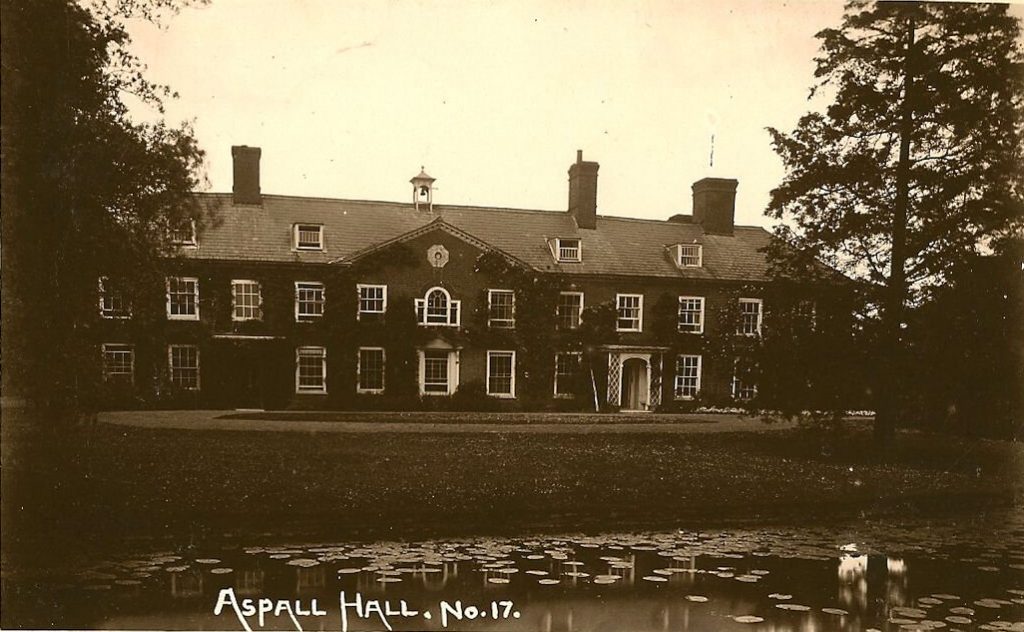 Mr Chevallier also found time to undertake the many duties which were expected of a country gentleman at that time, including serving as a JP, membership of the County Council, and sitting on the governing bodies of several local schools. His directorship of the MSLR can probably be regarded in the same light, though he presumably had a fairly pessimistic view of the railway’s likely prospects as he only invested a small amount of his own money in the project. His claim for recompense against the London & North Eastern Railway when they took over the line in 1924 was £95 0s 10d, a drop in the ocean compared to the claims of his fellow directors: £5,000+ by Lord Stradbroke, and £3,500+ claimed by both JD Cobbold and FM Remnant. In February 1902 when the company had to borrow £10,000 for the deposit required by the Light Railway Order, all the other directors gave personal indemnities to the lending bank, but he managed to avoid any such commitment. 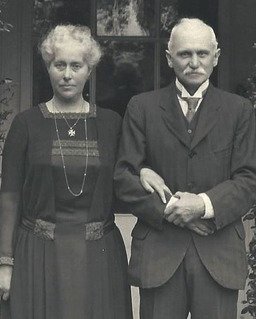 Chevallier was also chairman of the Halesworth Light Railway, an attempt in 1912 to complete the ‘missing link’ of the MSLR between Cratfield and Halesworth, since the latter company’s bankruptcy prevented it from raising any further capital itself. Although nominally independent of the MSLR, the two companies were clearly linked to some degree. Stringent financial conditions laid down by the Light Railway Commissioners put paid to this new scheme.

He must have been very proud when Lord Kitchener stayed at Aspall Hall in September 1902, as a prelude to the great man’s ride on the partly-built Mid-Suffolk line. Chevallier and Kitchener were in fact cousins, as Kitchener’s mother was a Chevallier and indeed had been born at Aspall Hall. Chevallier participated in many of the other ceremonies of the Middy’s early years, including cutting the first sod at Westerfield in May 1902, riding on the first official passenger train in September 1908, and presiding at several staff dinners. In autumn 1913, he arranged for the long grass growing on the banks of the unfinished Debenham branch to be cut for use as animal feed on his own farm, for which he paid the railway the princely sum of just 10 shillings! 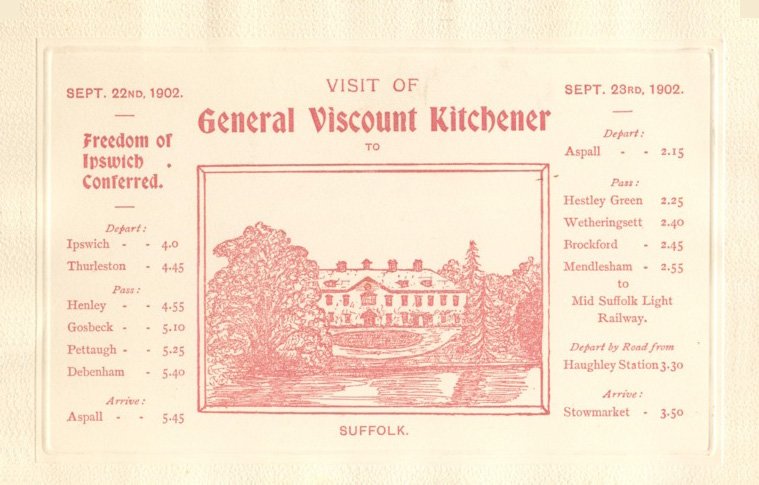 The programme for the visit of Lord Kitchener to Suffolk, including his ride on the MSLR. The image is of Aspall Hall where he stayed overnight. From the Aspall Cyder website.

Mr Chevallier regularly travelled from Aspall station to attend Ipswich Market every Tuesday, riding (at least on the Middy section of his journey) in the first class saloon or ‘Directors’ Saloon’ of composite coach No. 2. This saloon was formed by removing the partition between two compartments, and was furnished with upholstered seats round a table, an arrangement replicated in the current coach No. 13. In independent days, the line’s management ensured that this coach was always included in the Tuesday morning up train, and the return working from Haughley in the afternoon.

On a personal note, he married Isabel Amy Cobbold in 1897, another link between the eminent Suffolk families of Chevallier and Cobbold. They had three daughters, Eirene, Perronelle and Margaret. It was Perronelle who eventually took over the family cyder business, becoming a pioneer of organic farming and a founding member of the Soil Association together with her husband Cyril Guild.

JB Chevallier died in February 1940, leaving an estate valued at just over £10,000. His wife Isabel had died in 1931 when she was hit by a speeding car in the village.