Haughley – The Middy’s Link to the World

Haughley Junction, just north of Stowmarket, was where the Mid-Suffolk Light Railway connected to the rest of the British railway network. By changing at Haughley, passengers could catch direct trains to Ipswich, Bury St Edmunds, Norwich, Cambridge and London. Goods loaded onto a wagon at Brockford or Laxfield could be delivered in a few days to Aberdeen or Penzance.

The First Railways at Haughley

The first railway to serve Haughley was the Ipswich & Bury line, which opened in 1846 with a station about a mile to the west of the eventual junction. In 1849, the railway from Haughley to Norwich opened with a large new station at the junction of the two lines (the station was actually in the parish of Old Newton rather than Haughley). The 1846 station closed soon afterwards.

In 1862 the lines through Haughley came under the control of the newly-formed Great Eastern Railway (GER), which had a virtual monopoly of services in most of East Anglia.

The Coming of the Middy

Construction of the Mid-Suffolk Light Railway started at Haughley in March 1902, with materials being delivered by rail via the GER station. The new line curved away to the east, climbing a 1 in 42 gradient (steep for a railway!) over Haugh Lane bridge on its way to Mendlesham.

In 1904 the MSLR asked the GER if it could share the existing passenger station, but the proposed charges were regarded as excessive. So the MSLR built its own separate station on land further to the east, in a similar style to its other stations with a timber and iron building. There was a single track connection to the GER allowing goods wagons to be exchanged between the two companies, but this was not used regularly by passenger trains. Passengers changing to and from the MSLR had to trek between the two stations carrying their luggage.

Goods services on the Middy started when the first official train departed from Haughley at 8am on 20th September 1904. The first MSLR passenger train, on 29th September 1908, arrived at Haughley at 8.48am, having taken just over an hour from Laxfield.

A rare photograph dating from 1936, looking north from Haughley main line station’s footbridge. The separate Mid-Suffolk station is on the right, with its typical building. Two 6-wheel coaches are at the platform, while a Class J65 locomotive shunts some wagons. From the Friedman Collection.

In November 1939 the Middy station was closed and trains ran into a bay platform at the main line station, far more convenient for passengers. By this time both the GER and the MSLR had been absorbed by the London & North Eastern Railway (LNER), so the question of charges no longer arose!

At its greatest extent in the 1940s and early 1950s, Haughley was a surprisingly large station with:

Around midnight every night (Saturdays excepted), Haughley station witnessed an hour of hectic activity as trains from London, Peterborough and Norwich all converged to exchange the mails. Every platform line was in use as mailbags were transferred and coaches shunted, before the trains could proceed on their way. 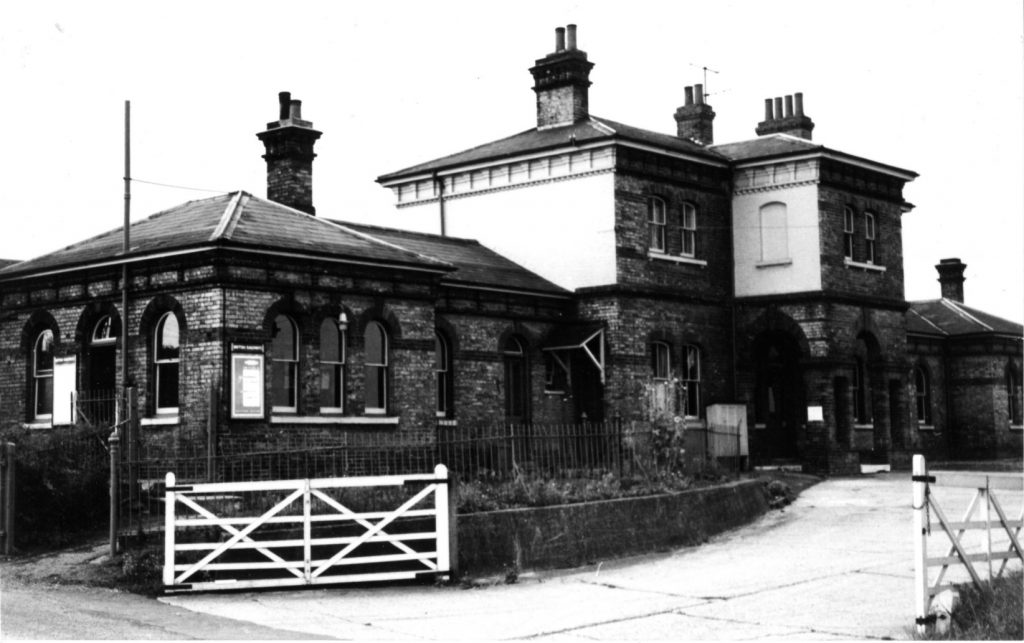 The imposing buildings of Haughley main line station from the approach road, sometime in the 1950s or early 1960s. The stationmaster’s accommodation was in the upper storey of the central block, with the entrance door under the small awning on the left side of that block. From the Geoff Rice collection.

A Laxfield-bound train departs from Haughley in 1951: this is probably the afternoon school train, with children waving from the windows. J15 class No. 65447 is one of the normal branch locos, but the train formation is rather unusual with two brake coaches and a Toad B brake van. The silo / grain drying plant in the background is being built on the site of the MSLR station. Photo by Dr Ian Allen, courtesy of Mrs P. Wickes.

The last Middy passenger train was the 5.35pm from Laxfield to Haughley on 26th July 1952. All the trains that day were packed with people experiencing the novelty of a railway closure: temporary facilities at Haughley provided refreshments to the crowds. The track was lifted during 1953/4, with material being stored in Haughley yard prior to re-use or scrapping.

When the Mid-Suffolk line closed, it was carrying so little traffic that the closure hardly affected Haughley. However, from the late 1950s strong competition from the roads really began to hurt the railways’ passenger and goods businesses, and the government decreed that economies had to be made. A station like Haughley was particularly vulnerable, being located nearly a mile from the village after which it was named. Although the main lines from Ipswich to Norwich and Cambridge remained open (as they do to this day), lesser-used stations such as Haughley closed in 1967.

Over the succeeding years, the platforms, signal box, sidings and most of the buildings of Haughley station have been demolished. All that remains is a small fragment of the main station building, next to the level crossing, which has been refurbished and is now used as offices by a building company. The grain drying plant in the station yard, a landmark visible for miles around, was demolished in 2008.

Today Haughley is once again a busy railway junction, even though no trains stop there. Among those passing through are the London – Norwich expresses, local passenger services between Ipswich, Bury, Cambridge & Peterborough, and freight container trains linking Felixstowe port with the Midlands and North. 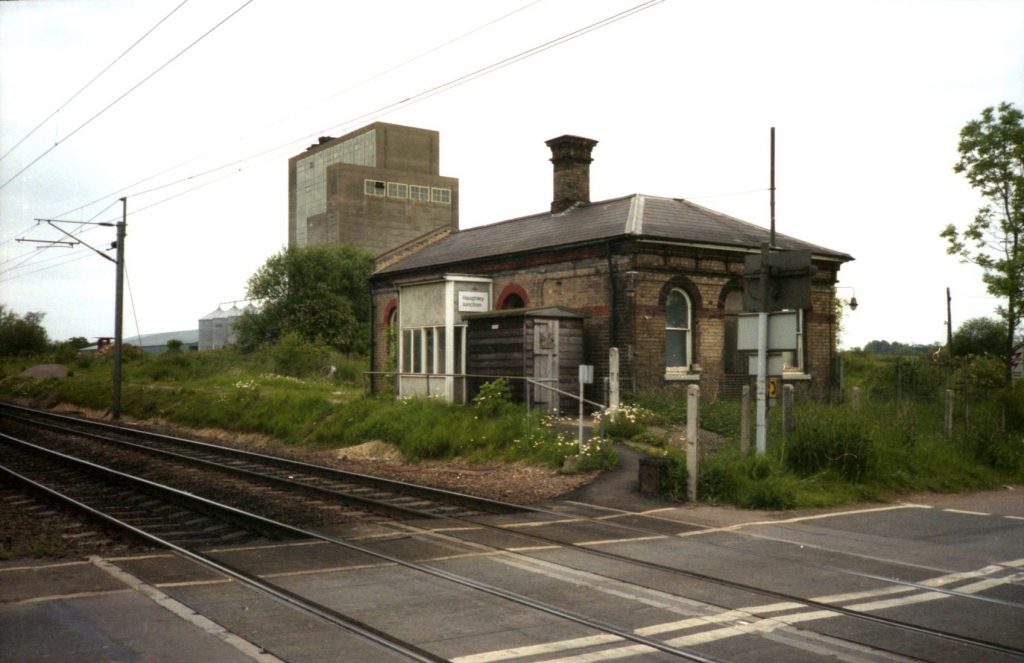 All that remained of Haughley station in May 1990! This part of the building is still used (in 2020), as offices for a building company. The massive silo in the background was demolished in 2008. Photo by Steve Crane.

Click on any of the pictures below to view the full image. 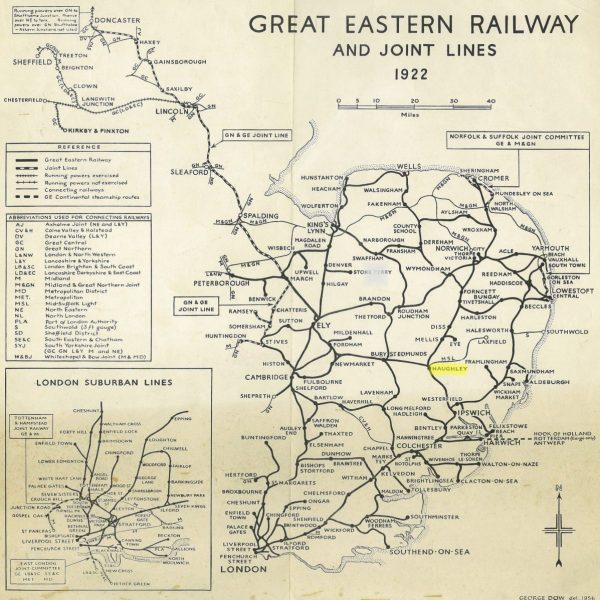 Railway map of East Anglia in 1922, with Haughley highlighted. At this time the Great Eastern Railway had a virtual monopoly of the area, its only rivals being the MSLR, the Colne Valley & Halstead, the Southwold, and Midland & Great Northern Joint Railways. 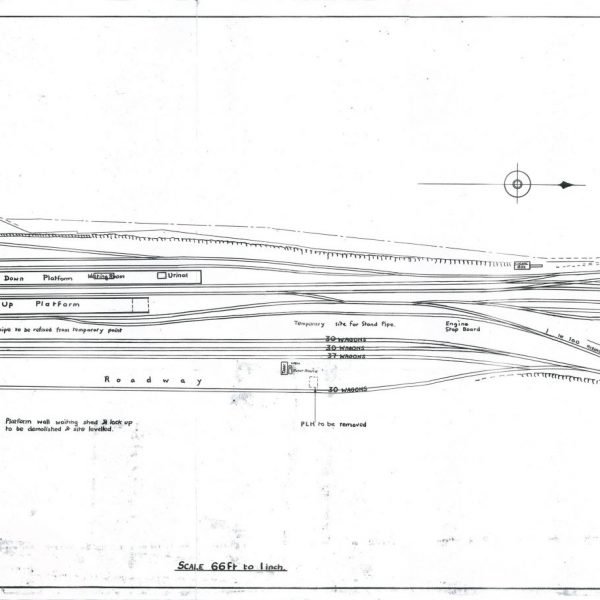 Plan of the Haughley Station site dated April 28th 1948 (just after the railways had been nationalised). A key shows the purpose of every room in the main building. Note the mis-spelling of ‘Laxfield’ in the location plan in the top left corner! 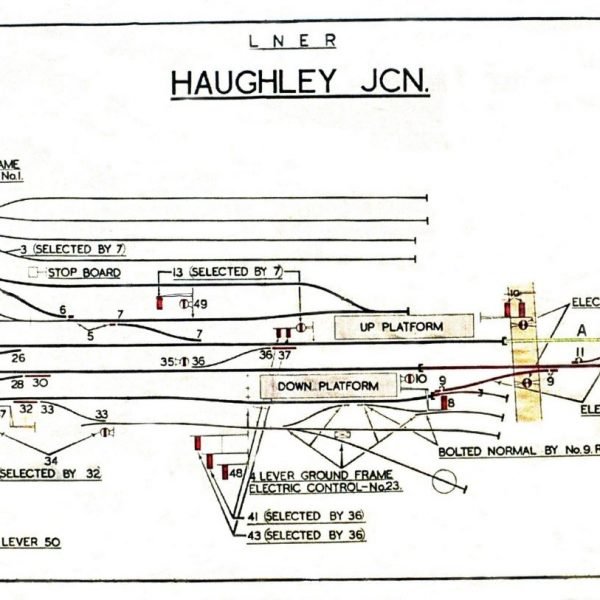 Reduced size copy of the signalbox diagram from Haughley Junction, probably dating from the 1940s. The MSLR branch can be seen in the top left. Every signalbox had one of these diagrams showing all the lines, points and signals controlled by the box. Courtesy of Mr Ray King. 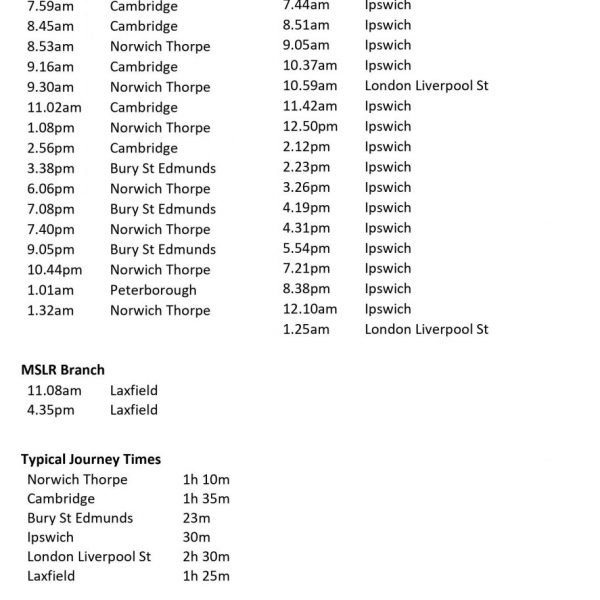 Trains calling at Haughley in 1950, listing weekday services on the main lines (towards Norwich, Cambridge and London) and departures for Laxfield on the Mid-Suffolk branch. Also typical journey times to major destinations.