For the MSLR, as for most other railways in Britain right up to the 1960s, goods traffic was more important than passengers. In the last six months of the Middy’s independent existence before it was absorbed by the LNER in 1924, goods traffic of various types accounted for 80% of total revenue.

At that time, practically everything that had to be transported any significant distance was sent by rail, and the local station was where all these goods were despatched from and arrived at. Here we take a look at the sheer variety of goods which the MSLR carried.

From very early on, railways in Britain operated under ‘Common Carrier’ obligations, because of their near-monopoly in freight transport This meant that they had to carry any cargo offered to them at a nationally agreed charge, which prevented them from ‘cherry-picking’ the most profitable traffic and showing undue preference to individual customers.

But this put the railways at a severe disadvantage as soon as motor transport started to grow after the Great War. The road haulage contractors could choose which traffic they wished to carry, undercut the railways’ published prices, and of course could offer a door-to-door service. Over a period of time, the railways found themselves left with just the traffic which road transport found inconvenient or unprofitable. The Common Carrier requirement was eventually removed in 1962. 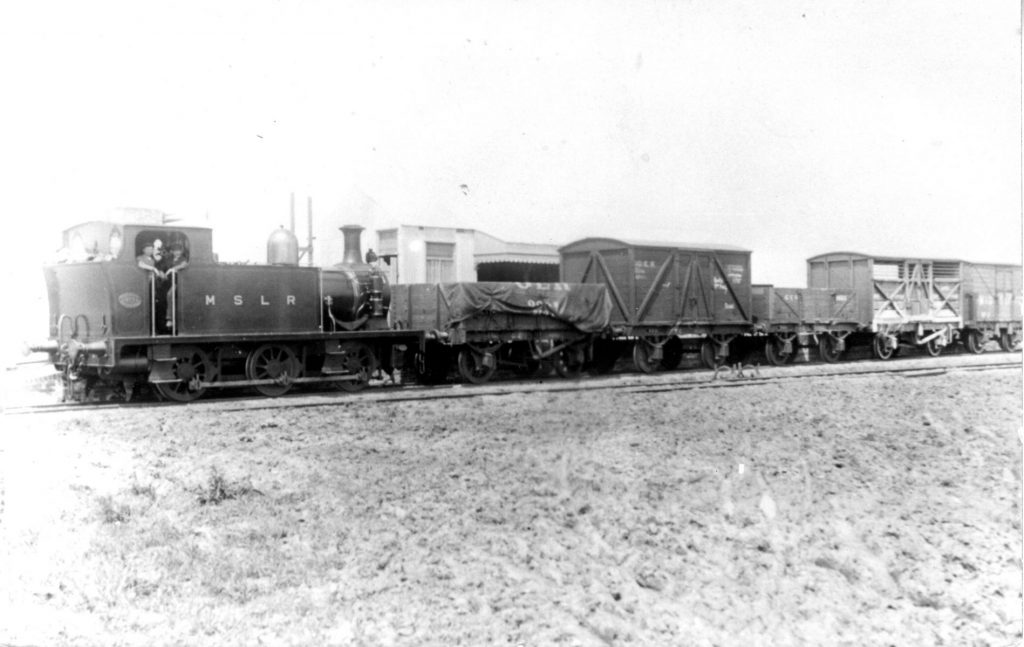 MSLR loco no. 1 and goods train standing at the incomplete Kenton station, 1906. The train includes open wagons, covered vans (including on the far right one converted from an open wagon), and a cattle wagon. From the Geoff Rice collection.

The transport of animals was an important business for the railway, with special types of wagons (horse boxes and cattle wagons) being dedicated to this traffic.

In the early days of the MSLR, large numbers of cattle were carried and most of the stations had facilities for handling them. These consisted of a short platform at which the wagons could be loaded and unloaded, with wooden pens to temporarily hold the animals.

Hundreds of cattle might be sent to market each week. Most of this traffic was lost to the roads by the late 1930s, though petrol rationing brought about a brief revival during World War II. 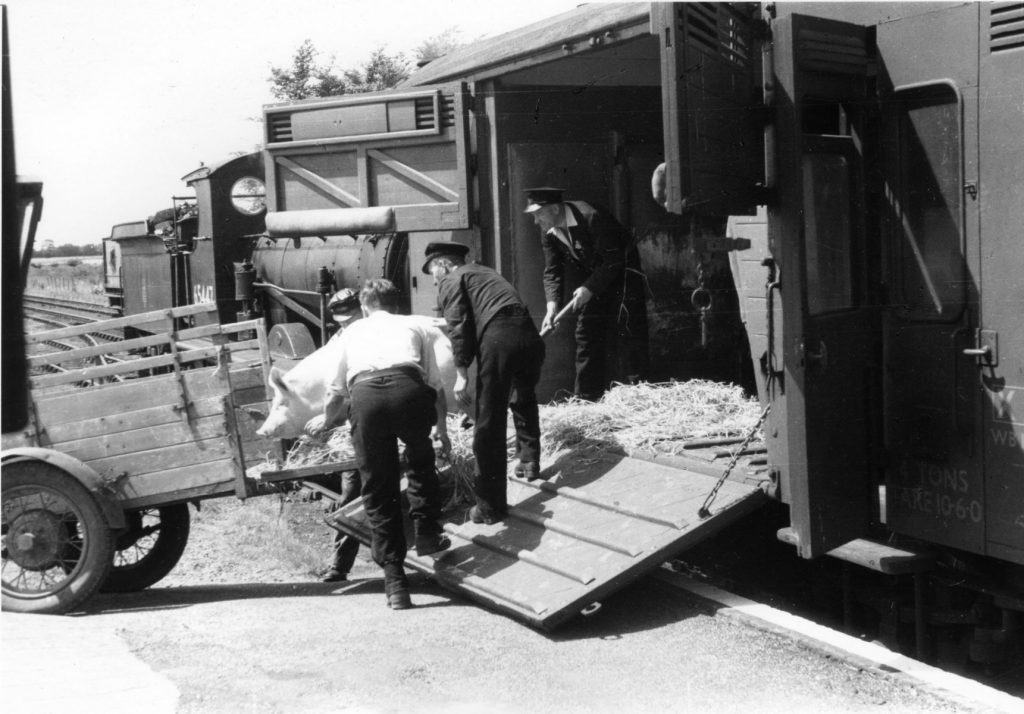 An important ‘passenger’ has just arrived at Laxfield for a local farmer, having travelled in the comparative luxury of a horsebox. This picture was taken just a few days before closure, in July 1952. Photo by George Powell, courtesy of Great Eastern Railway Society.

Coal was the most important incoming traffic on the Middy. In the early years of the twentieth century, coal was the major source of power: most houses in Mid-Suffolk would have relied on coal fires for heating and cooking, while there was also significant demand from rural industries such as blacksmiths. 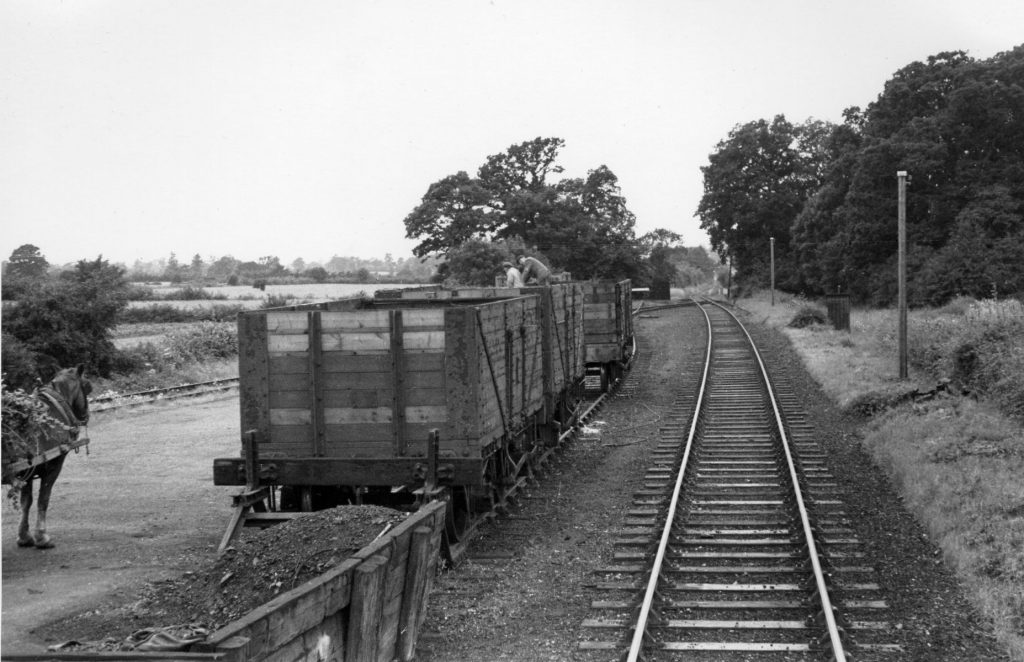 In July 1951, coal wagons sit in the sidings at Stradbroke. Men are working in one of the wagons, probably bagging up the coal ready for delivery. A horse waits patiently nearby ready to accept a load on its cart. Photo by George Powell, courtesy of Great Eastern Railway Society.

Wagons loaded with coal were shunted into sidings at MSLR stations, and a coal merchant would bag up the coal for delivery to local houses and farms, using a horse and cart or later a motor lorry. The empty wagon would then be collected and returned to the colliery to be refilled.

Some of the coal merchants were local men who often combined this activity with other occupations. Other coal merchants were larger businesses such as Thomas Moy Ltd of Colchester, who worked out of many stations across East Anglia including several on the MSLR. Moys owned their own coal wagons which carried their name prominently on each side. An example of such a wagon is displayed here at the Museum. 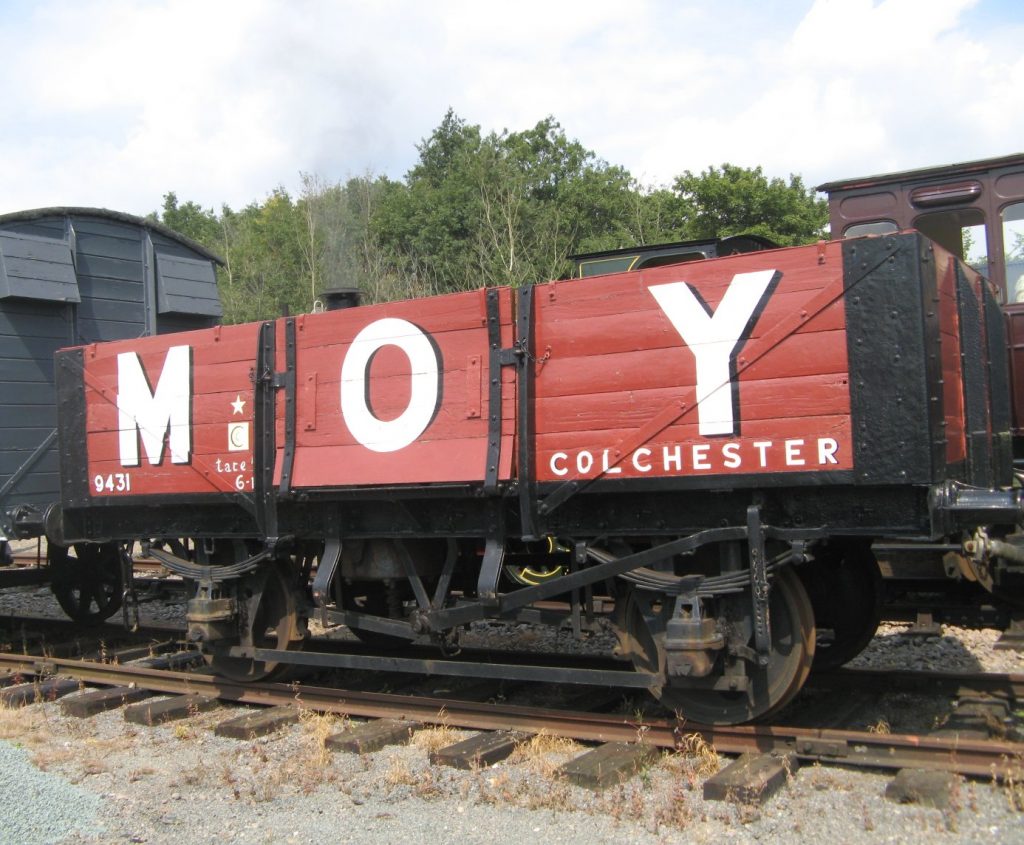 On display at Brockford is this representation of a wagon owned by Thomas Moy Ltd of Colchester, typical of those used to deliver coal to stations on the MSLR. It was converted from a more modern British Railways wagon. Photo by Rob Murray.

Before 1920 barley, wheat, straw and hay were the main commodities transported out of the area by the MSLR. After this date wheat production declined as farmers could no longer compete with imports, but barley remained in demand for brewing and animal feeds.

In the later years of the Middy, most of the barley was collected by lorry and taken to a granary adjacent to Stradbroke station. There it was bagged into 16 stone sacks and loaded into railway vans ready for despatch to brewers such as Bass. Even the sacks could be hired from the railway, for one penny a week. 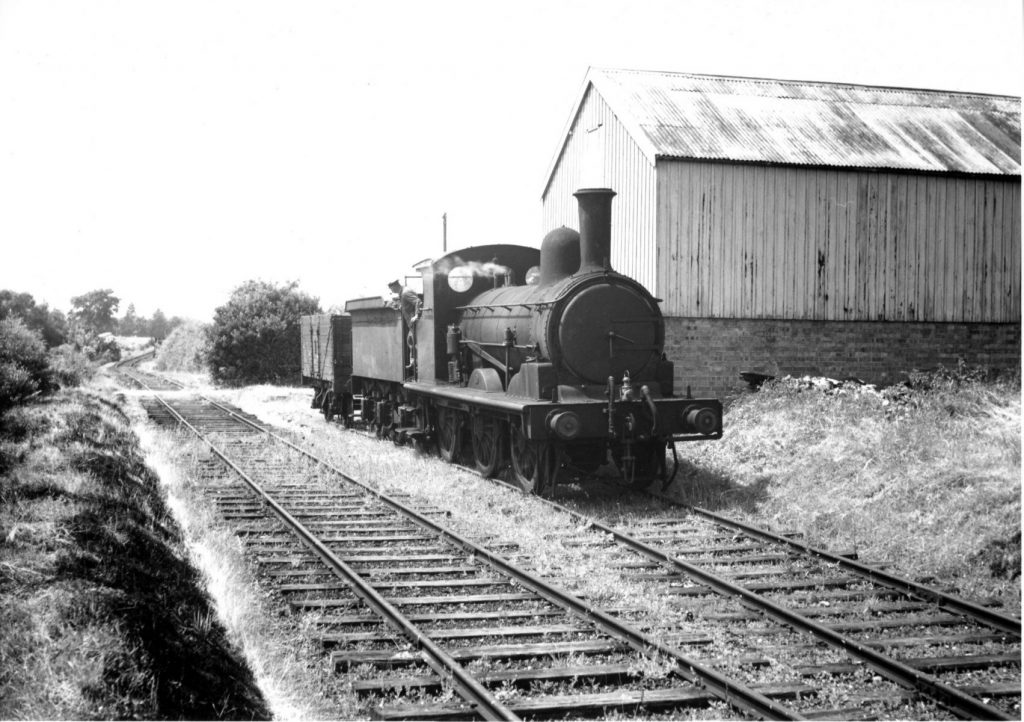 A single wagon apparently loaded with vegetables is shunted in the siding at Goram’s Mill, Laxfield. The mill building was being used for the storage of potatoes. Photo by Dr Ian Allen, courtesy of Mrs P. Wickes.

From the late 1920s sugar beet became an increasingly important crop as the government encouraged production of sugar in the UK. In the peak year of 1934, 21,000 tons of beet were carried in ordinary open wagons to the factories at Bury, Ipswich and Cantley.

Milk was despatched in 17 gallon churns from all stations, destined for Bury, Stowmarket, Ipswich and London. Apples, plums and soft fruit were loaded at Wilby, Laxfield and Cratfield. 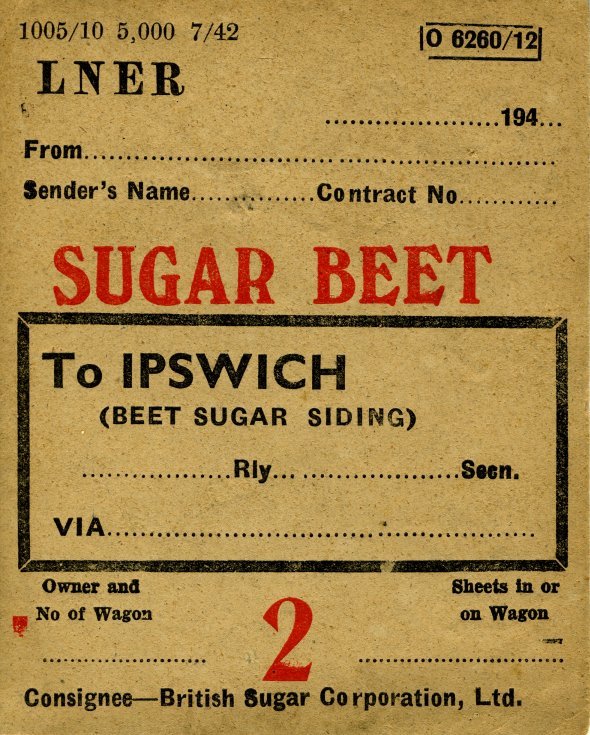 Example of the labels which were attached to wagons to identify their contents and destination. From the MSLR Museum collection.
Menu