Three original MSLR buildings are preserved at the Brockford museum site. The first to arrive, in August 1991, was the hut which had provided facilities at the railway’s smallest and quietest station, Wilby. Amazingly, many of its original fittings had survived nearly 40 years’ service as a garden shed.

No station was provided at Wilby when the MSLR first opened. Following requests from local residents, a very basic station was opened in July 1909. The facilities comprised a timber and corrugated iron hut which served as the booking office and staff room, an old wagon body used as a lock-up store, two oil lamps and the station nameboard (which is now in our Museum). There was no waiting area or even a seat for passengers, and no toilet facilities until after the Second World War.

Wilby station in its usual drowsy state, 22nd June 1952 (six weeks before closure). The hut is probably in the grey livery which most MSLR buildings received around the time of the Second World War. Photo by George Powell, courtesy of Great Eastern Railway Society.

Most of the buildings on the railway were supplied by Jackson & Co, the contractors for the line, but they had been dismissed before Wilby station was constructed. It’s possible that Wilby used a “spare” hut which had been left behind by the contractors. In any case, all the line’s buildings share a similar basic structure, typical of the early 20th century: a wooden internal frame, clad on the outside and the roof with corrugated iron, and on the inside with tongue-and-groove match boarding.

There were always very few passengers at Wilby, reflecting the fact that its namesake village was some 1½ miles away. Even in 1928, Wilby only issued around 9 tickets a week. By the time the railway closed in 1952, the only passengers were children attending secondary school in Stowmarket. 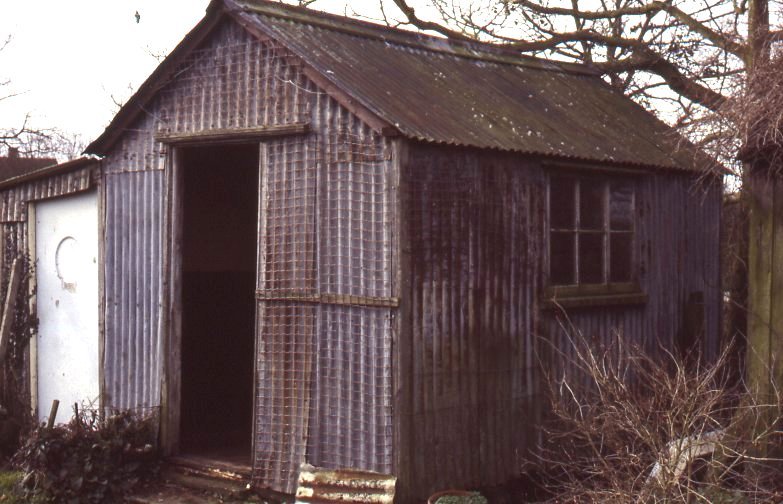 The former Wilby station building in use as a garden shed, April 1989. A lean-to has been added on the non-window side. Photo by David Chappell.

Soon after closure, the hut was removed from the station platform, and at some point it was installed next to an old cottage on the Stradbroke – Laxfield road, where it was used as a garden shed. David Chappell, one of the founders of the MSLR Society, made contact with the owner of the shed, Mr Eric Chambers, who eventually offered it to the Society for £250, a considerable sum for the young organisation. Obviously this was an offer which could not be refused, and in August 1991 the hut was lifted from the garden and transported to Brockford. It was positioned on the platform which was being constructed based on the former cattle dock, and was a highlight of the museum’s first Open Day on August Bank Holiday that year.

Luckily many of the interior fittings had survived for nearly 40 years, including the counter with lifting flap, and the cash drawer with original graffiti from an early MSLR employee. On the wall was a pencilled list of useful telephone numbers. An enamelled sign “TELEPHONE: TELEGRAMS MAY BE TELEPHONED” also came with the building, indicating that this service was offered to the general public at a time when very few people (especially in rural areas) had their own telephone.

A number of other interesting objects were discovered at various places in the building, such as the cavity between the inner and outer walls. These items included sections of timetable going back to 1909, fragments of railway poster from the 1920s, and part of a box of breakfast cereal! 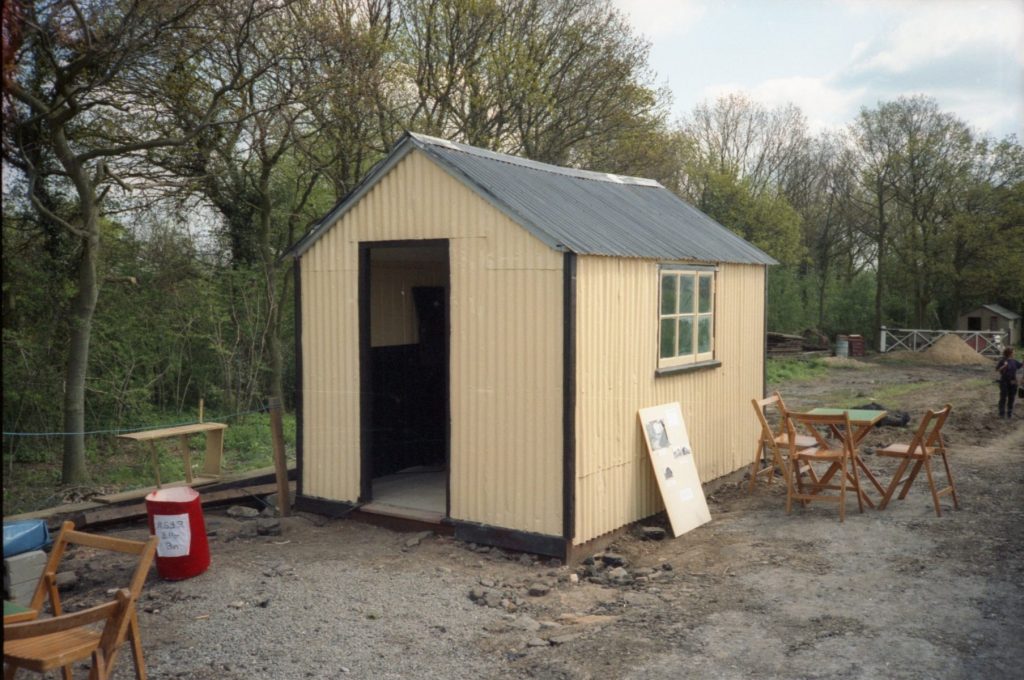 The beautifully restored Wilby building attracted a great deal of favourable comment at the youthful MSLR Society’s second public Open Day on 3rd and 4th May 1992. Photo by Steve Crane.

A team led by Joe Werner undertook a thorough internal and external restoration of the building, including the repair of damage unfortunately caused by a dumper truck before it was moved to the museum. The hut was thus transformed into a typical office as seen on small MSLR stations. For the second Society Open Day in May 1992, it was carefully positioned on the platform, together with the former Brockford ticket office which had been acquired in December the previous year, to re-create the appearance of the original Brockford station. 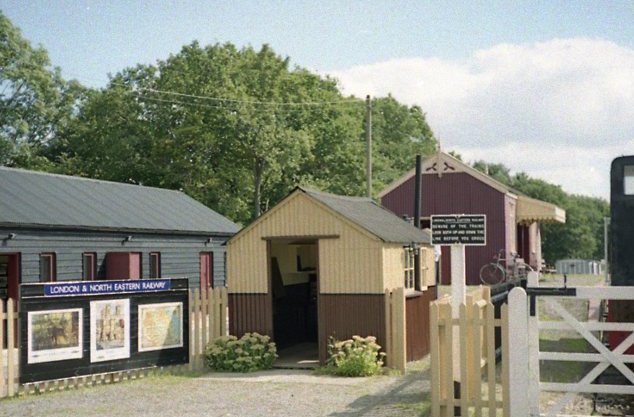 The Wilby hut in its current location at the site entrance. It is seen here in Summer 2001, bearing another one of the many different colour schemes it has carried in its life. Photographer unknown.

Later in 1992 the Society acquired a third ex-MSLR building, the much larger station building from Mendlesham. In order to make space for this new building on the platform, the Wilby hut was moved to a position at the site entrance, where it has remained ever since. All these buildings require continual maintenance, and the Wilby building has appeared in various colours representing different stages in its railway career, ranging from its early “Victorian Brown” (a shade of maroon) to the dark brown and cream livery of the London & North Eastern Railway. 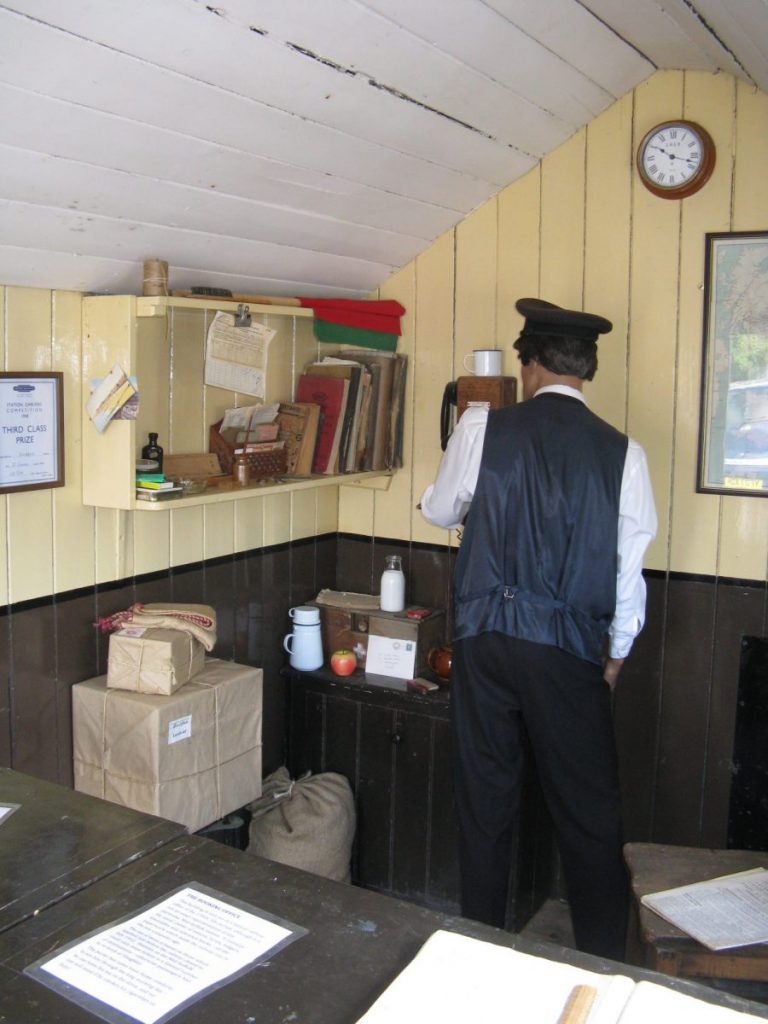 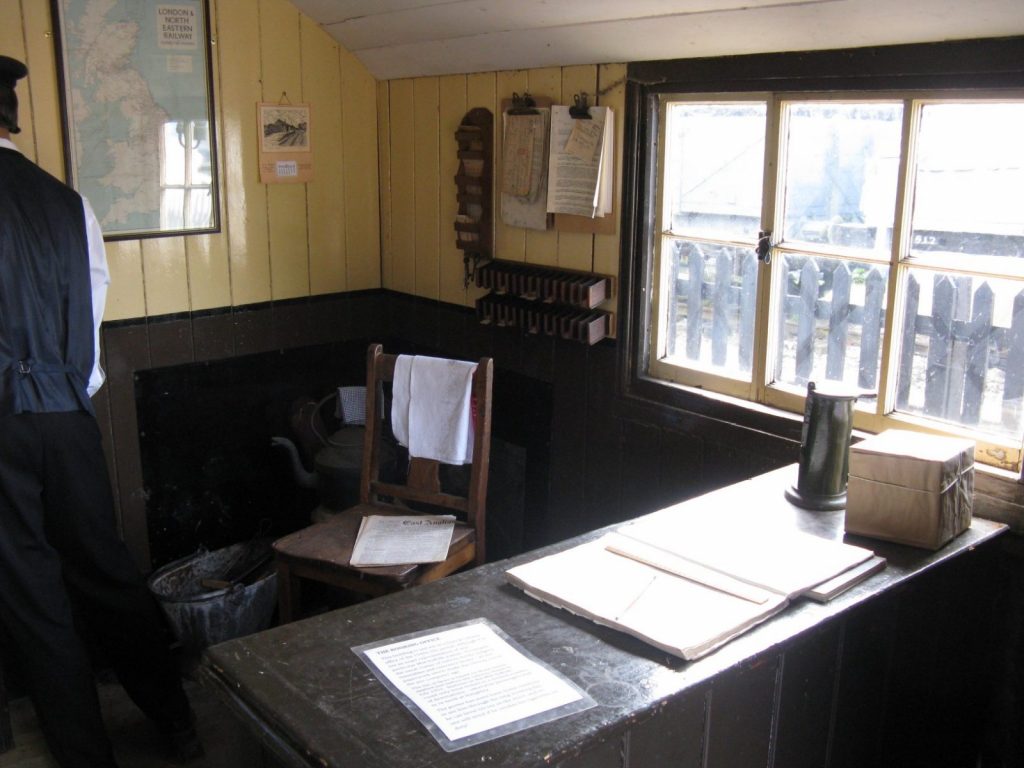 The interior of the Wilby hut, laid out as a typical railway office of the 1940s-50s period. It contains the usual clutter of notices, forms, ledgers, timetables and reference books – all the paperwork needed to run the railway in the pre-computer age. Photos by Steve Crane.

Acknowledgements: this is based on an article by David Chappell which first appeared in Making Tracks Issue 77 (Spring 2011).