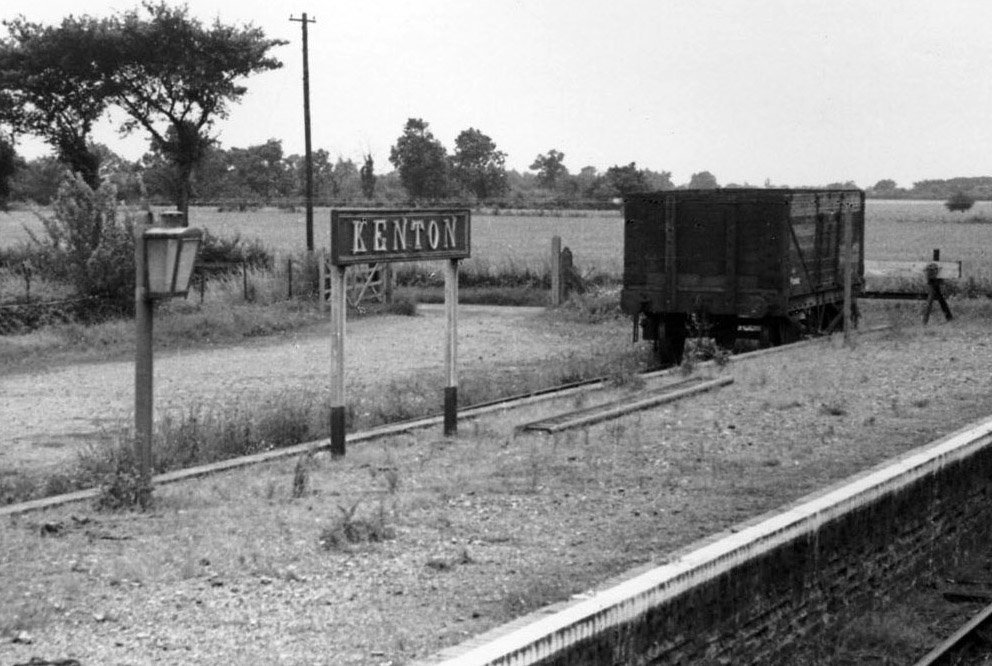 1st July 2020
The Kenton Station Running-in Board
One of the very few genuine station running in boards known to exist since the closure of the old railway, the Kenton sign is no longer on loan to the Middy, but now a permanent part of the Museum’s collection of artefacts.
After the closure of the line in 1952, the two Kenton running-in boards were removed  to the Museum of British Transport, Clapham. Kenton was the only station on the Middy to have two running-in boards, and the railway authorities decided to save them as part of the national collection.
In the early 1970s, Clapham Museum was closed down and the railway exhibits were transferred to the new National Railway Museum (NRM) at York, which opened to the public in 1975.
After the fledgling Mid-Suffolk Light Railway Society was formed, Archivist, David Chappell contacted the NRM to ask about the possible loan of one of the signs. This request was turned down, on the basis that the Museum then did not have secure enough premises. This decision was, under the circumstances prevailing at the time, quite correct.
During the ensuing years the MSLR became a proper company, a registered Charity and a fully recognised heritage railway, winning the Heritage Railway Association’s Interpretation award in 2012. David had kept the contact with the NRM and in 2013 their policy changed to one of greater outreach for their collection and, after another formal request, the MSLR became custodians of the Kenton sign, but on loan.
Another 6 years on and finally, after nearly 30 years of negotiation, the Deed of Transfer form has been completed and signed and the Kenton Running in board officially belongs to the Middy at last. A splendid outcome for the railway and David Chappell’s unfailing diligence and perseverance.
But rest assured the MSLR will still be steaming once the Covid-19 crisis has passed and visitors will again be able to see a real piece of English Railway History at the Middy Museum