The Middy had three locomotives of its own, all supplied by Hudswell Clarke of Leeds (the builders of our very own no. 1604, currently being restored at Brockford). This account is based on the detailed questionnaire which the MSLR compiled for the Ministry of Transport in 1920.

The first goods services on the Middy were hauled by a loco supplied by Jackson the contractor, who was still working on the line. This was obviously not a satisfactory long-term solution, and in October 1904 two locomotives were ordered from Hudswell Clarke. When passenger services began, another loco was required to provide cover for maintenance, so a third engine was ordered in November 1908.

Numbers 1 and 3 were essentially of the same type, while number 2 was smaller and lighter. Note that the only evidence for any of the locos actually carrying a name is this photograph of no. 1.: 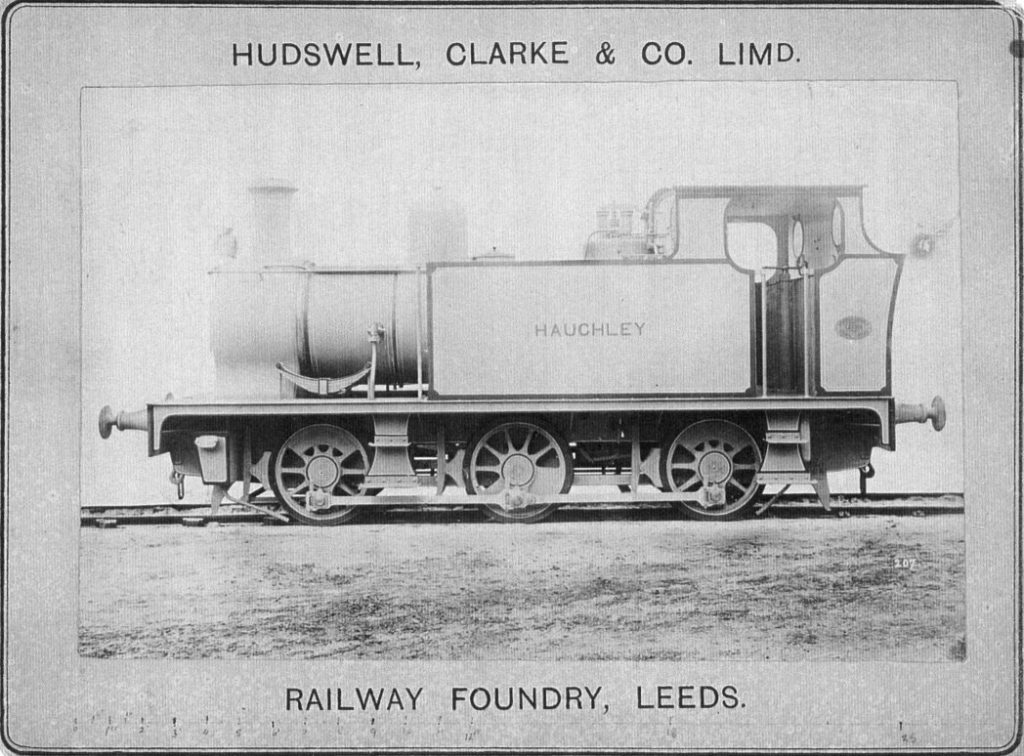 Official works photo of loco no. 1 taken in 1904, before painting into MSLR livery, and showing the name ‘HAUGHLEY’ which it briefly carried. Geoff Rice collection.

The questionnaire sent to the MoT described the MSLR’s fleet as three 0-6-0 side tanks, constructed to run at speed in either direction. The weight of each locomotive in working order was shown in the following table:

It appears from a comparison of the total weights that the table lists locomotive numbers 1 & 3 first, then number 2, although the latter was shown as nearly half a ton heavier than the maker’s official figure.

The authorised axle load refers to the maximum permissible for any vehicle running on the MSLR’s lightweight track. It is interesting that the lightest engine should have the greatest wheel loading: perhaps its slightly different design and shorter wheelbase had a significant effect on the weight distribution across the three axles.

Boiler pressure for all three locos had been reduced from an initial 150 pounds per square inch to 140 psi, presumably reflecting their increasing age. 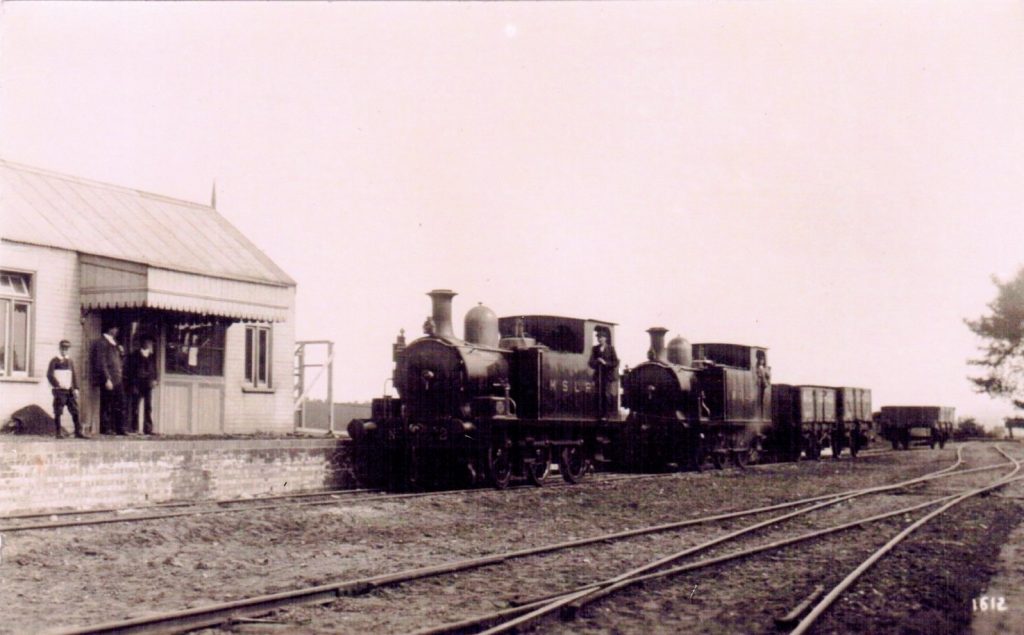 In 1905, the MSLR’s entire loco fleet poses at the incomplete Haughley station, no.2 leading no. 1. Locomotive Publishing Company.

The fuel used was Nottingham Steam Coal, supplied by various local coal merchants or the Great Eastern Railway (GER). Water was obtained from one deep well and two ponds, using petrol-driven pumps which raised the water into galvanised iron tanks for storage. Peter Paye notes that there were wells at Haughley and the east end of Kenton station (only one of which must have been in use at this time), and ponds at the west end of Kenton and at Laxfield (where a nearby stream was used in preference during winter months). One can only imagine the impurities which some of this water must have contained, and the corresponding effects on the locos’ boilers.

Livery at this time was a reddish-brown, probably similar if not identical to the original ‘Victorian Brown’. Contemporary photographs show that, despite the hard times the railway was going through, efforts were still made to keep the paintwork reasonably clean and the brasswork polished.

A well-known photo, but one of the few of this engine. Loco no. 3, pictured at Laxfield in late 1908 or early 1909, acts as a backdrop to the schoolchildren who won prizes in an essay competition organised by the railway. Photo by Harry Webb, Geoff Rice collection.

The impecunious Middy never really maintained its locomotive fleet properly: they only employed an odd job man in the loco shed rather than a skilled fitter, and major tasks had to be handled either by the GER or specialist engineering companies. At the time of the questionnaire in late 1920, loco no. 1 was fully serviceable, but nos. 2 & 3 were in need of repair and an E22 class engine was on hire from the GER to maintain services until they could be overhauled.

Loco no. 2 at Laxfield around 1923: although the paintwork is looking rather faded, the highly polished brass still shines proudly in the bright sunshine. On the footplate are driver J. Bloom and (almost invisible) fireman J.S. Read. Standing on the ground are guard A. Bryant (left) and porter/guard N. Allum (right). Geoff Rice collection.

As soon as the London & North Eastern Railway took over the line in July 1924, all 3 of the MSLR’s own locomotives were replaced by ex-GER class E22 engines (now re-classified as J65s). No. 3 was withdrawn for scrapping the very next month, while nos. 1 & 2 lasted long enough to be classified by the LNER as J64s and renumbered as 8316 & 8317. They were used for a few years as shunters at various locations around the Eastern counties, 8316 being finally withdrawn in 1928 and 8317 in 1929.